Inspired by Spring being officially upon us in the northwest (while the rest of you in North America are having “summer”), I went on another cleaning rampage the weekend before CROC, this time focusing on the garage. For the most part, this involved coming to acceptance that the 17″ piece of baseboard, fractional container of petrified plumber’s putty, sourdough incubation chamber, and various other home improvement remnants Are Not Going To Be Used. Ever. Throwing out all this stuff freed up a lot of space on my “workbench,” formerly known as The Horizontal Surface On Which Crap Is Dumped.

In the little space above the garage door were two boxes containing various and sundry memorabilia, packed sometime before I moved here ten years ago. Whereas the bulk of the garage took about an hour to clean — once I was intent on throwing stuff out — going through these time capsules took several hours. Among their contents: 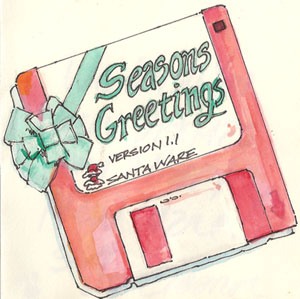 I tossed (after demagnetizing) the tapes, and recycled the newspapers and theater programs. I’m not sure what to do about The Bulk – part of me wants to find Bob’s mailing address and send them to him, hoping to provide inspiration to rekindle his passion. The maps, art, journals and yearbook I’ll keep, even though they’ve sooooo failed the twelve-months-in-a-box test.

Anyone else hold onto stuff for way too long?