I worked on a customer proposal all weekend — even Columbus Day holiday — and needed a physical and mental break. We have a high pressure system moving through this week. (High pressure == good weather) It doesn’t make up for an icky September, but it is opportunity enough to spend all day biking

I did a 57 mile, clockwise loop through Seattle and around the northern part of Lakes Washington and Sammamish. The first segment is the familiar route I used to commute to work last year.
Just after crossing the western span of the I-90 floating bridge, I turned right onto the Lake Washington loop.

(It’s the fifth red triangle from the left on the map below.)

Lake Washington Blvd and the roads winding through the UW Arboretum are pretty, but the serenity of is soon offset by the chaos of being close to the university. There is a lot of traffic, most of it students. (Think “bad driver, with good reflexes, late for class.”) I skirted along the sidewalk for the next couple of miles until 25th Ave NE, where the traffic drops off a lot. The main artery changes from 45th to Sand Point Way into a primarily residential area of Seattle. (I lived here briefly in the early 1990s. My former apartment is now an office building with a Washington Mutual branch.)

After a short stop at Cascade’s office, I continued up Sand Point. Just after it ends, there’s a short jaunt through “downtown” Lake City on 35th, which joins Lake City/Bothell Way. This is a very busy street, but fortunately with a lot of downhill and a transit lane. Just about when it tapers out is the entry point to join the Burke Gilman trail.
(I know I could have caught the Burke Gilman trail near Montlake, the epicenter of the Unversity of Washington chaos, but I don’t like that section because it’s rough and has dozens of crossing driveways.)

The Burke Gilman trail eventually joins the Sammamish River Trail, which offers a much more rural feel. The SRT also benefits from its proximity to a couple of ball fields: there are bathrooms with running (and potable) water. The trail is also wider and has longer, straight sections, great if you want to go faster without interfering with others’ enjoyment. Pedestrian traffic does pick up as you get closer to its southern terminus near Redmond Town Center/Marymoor park. 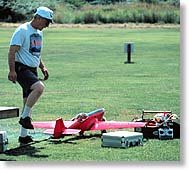 I stopped briefly at Marymoor park to grab a snack and watch some kids playing in the remote controlled airplane section. This is a huge park, well worth the $1.00 parking fee. (Doug has been trying to talk me into watching a time trial at the velodrome.)

After exiting the park, I followed East Lake Sammamish to Thompson Rd, point 8 on the map. Riding up Cougar Mountain Dr. has helped put things into perspective: this hill didn’t seem bad at all. A few more miles later, I was back home. Total distance 57.7 miles with 2,845′ of ascent. My pace was slower than I would have preferred, but I didn’t feel tired until the last few miles.

So, this brings me to 2,253.7 — number two on my new year’s resolutions was to ride at least 2,250 miles. Yesterday’s ride put me over that benchmark. I’ve already done number three and I’m on a reasonable pace for riding all year. Number four, which I noted was going to be the hardest, is not going to happen this year. In fact, I will be hard-pressed to match last year’s average speed. This is something I will try to work on during the winter…