Last year at this time, my wife found carpenter ants in the corner of the garage. We got a quote from an exterminator, but the only option they’d consider required a one year contract with monthly “treatments.” Net outlay would be $300 for the initial treatment plus another $450 for one year of followups.

I had several problems with this:

So for $21, I bought a pound of boric acid and some pre-mixed spray at Home Depot, removed the plastic and insulation, and coated the walls where we saw a definite nest. I followed up the remaining permiter with the boric acid. That seemed to fix the problem…

Until this evening. As I was pulling in the driveway this evening, I noticed my wife was hauling stuff out of the garage. She’s visibly upset, and eventually I figure out it has something to do with the ants streaming along one of the garage walls. 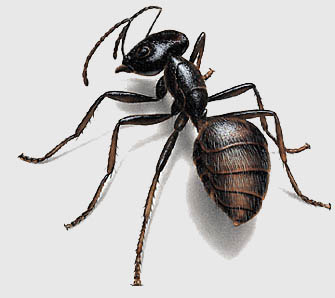 I spoke with a guy at Home Depot at great length and came away feeling that the only way to rid my home of carpenter ants was to spray around the perimeter very thoroughly, squirt boric acid behind the outlets, then, the following week, go after nearby food sources like tree stumps.

They recommended a $35 bottle of Ortho-Klor, which has bifenthrin. According to detoxourhomes.org, this rates a “yellow,” which I assume is worse than Boric Acid (a “green”) but not as bad as chlorothalonil, an organochloride. The labels on all of the products you’ll find in the store are very scary, and I have strong reservations about using them. However, at this time, it’s too late to put up a sign: “The aphids are better next door.” Ants can’t read.

After the garage was cleaned out, I pulled off the plastic, donned my long-sleeve shirt, respirator, goggles and started mixing more ant toxin. I have to say again, that I really have concerns with using this stuff. It’s not just the “toxic to fish and wildlife,” but also it being absorbed by skin. And the math… the recommended mixture is 1 tablespoon to one gallon, unless you’re going after termites, then it’s 6 tablespoons to a gallon. (So a one-quart bottle will do about… 64 gallons! My God, that’s like two bathtubs.) The labels claims it kills ants for anywhere from four months to five years. five years?!

I spent most of the evening spraying in corners and especially saturating areas where I saw ants. I tried to keep it very close to the house so the kids would be less likely to play in it, but I can’t help but feel the earth is scorched. (Can you tell I’m really worried about the toxicity of this?) After the stuff dries, I’ll put the insulation and plastic back on, then slowly restock my garage. I guess this is incentive to get rid of all the junk I’ve acquired, eh?

Strangely, our other two “pests” don’t bother me.