I found my 250th geocache just before Thanksgiving, a milestone that officially elevates this pursuit from being a “hobby” to a “benign obsession.”

There are several categories of container based on size.  The smallest ones are “micros.”  These can be as big as a 35mm film canister – enough to contain a log, but nothing else.  There’s a subset called “nanocaches” that are about the size of a fingernail, magnetized, and usually sticking on the back of something.  I hate these. They’re usually in busy places, the logs are hard to roll back into the container, and the container isn’t water tight (further hampering my adult fingers rolling the log).

The “small” cache above will hold a log book, pen, and trinkets for the young’uns.  The containers can be made of anything, though the “lock-and-lock” (snap down flaps on four corners) are very popular.  (Assuming I can get the permit approved, this one will be placed in Lake Sammamish State Park.)  To make them more difficult to see, you can wrap them in camouflage tape.

“Regular” containers are my preferred size because they are in non-urban areas where poking around isn’t going to attract undue attention.  Plus, they can hold cool stuff like plastic dinosaurs.   Old ammunition boxes are popular because they’re sturdy, waterproof containers that have already been painted green. 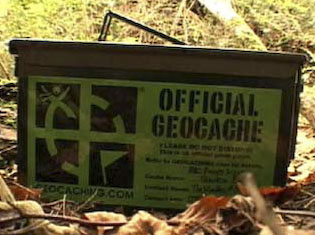 “Large” containers are typically the size of a 5-gallon paint bucket.  These are rare because of the difficulty of hiding an object that large.  Still, there’s a book cache near Redmond Town Center, and over by Beaver Lake, someone has set up a smallish garbage can as a “ball exchange cache:” you can drop a soccer ball and take a volleyball (or vice versa)

Now as for cache types, there are several:

Most of my finds are “traditional caches,” which means “a container at the specified coordinates.”  It’s not always that easy, though.  The one closest to where I live was well-camouflaged: underneath a hedge was a sprinkler grate; pop that open to reveal a sprinkler knob.  Lift the knob out and the cache is on the “fake” bottom.  It took me several attempts before I thought to peek under the grate.

Multi-caches have one or more waypoints.   These are generally my favorites (close second: mystery caches below), but they require the forethought in printing out the directions.  (I am not wired for paperless caching yet – the subject of my next post.)  The best ones are equivalent to self-guided tours of an area.   For example, the ten-stage one I did in Columbus, Ohio, led me to different landmarks throughout the downtown area.  At each landmark, I was to observe something to compute the coordinates to the next landmark.  The owner had the foresight to make it easy to recover from an inaccessible stage, such as was the case when a monument was under deconstruction.  Locally, I’ve enjoyed some great tours of Coal Creek mining history by Abby Wolfe, aka “hydnsek.”

Letterbox hybrids are a combination of letterboxes (which precede geocaching) and geocaches, intended to introduce each group to the other’s obsession.   Letterboxers have neat ornate (and often handmade) ink stamps and beautiful textual puzzles on how to find the box.    (Note to self: I inadvertantly found the “Creatures of the Deep” letterbox while looking for a cache.)  There aren’t a lot of these – I’ve only found two.

Mystery caches are a grab bag category.  Some require you post a photo of yourself at the location.  For example, Boston’s museum of science had a model of the solar system where scaled planets were scattered in the greater Boston area in their (also-scaled!) orbits from the science center. The “cache” involved visiting at least four planets and taking a photo of yourself in front of the kiosk. There’s a local-equivalent solar system where the “bonus cache” — likely a dwarf planet or asteroid — is determined by visiting the ten other solar bodies. Because the outer planets remain, I am unlikely to finish this until spring.

Most of the time, these caches are not at the specified coordinates and require solving a puzzle of some sort. For example, one I found recently involved careful reading of the description to find the name of a “fake book” shelved (with permission) at the Sammamish branch of my library system.
Night caches are also considered “mystery” types because you’ll need a flashlight to follow the trail tacks (reflective markers) to the actual box.

When I have a sporting chance at the puzzle, I like the extra intellectual challenge.  But sometimes, these puzzles are incredibly obscure. For example, another mystery cache I’m working on has its coordinates encrypted in Navajo Code Talker.

Project A.P.E. was a marketing gimmick for the remake of the movie Planet of the Apes.  Only two of these caches are left.  The most popular one, “Tunnel of Light,” is nearby, best approached via the Snoqualmie Tunnel on the Iron Horse State Park.  It’s huuuuuge:

The other’s in São Paulo, Brazil.

There are types of geocaches where there’s no final “box” to find:

Web cams – there are two of these in the area, both Department of Transportation traffic cameras (one near Microsoft, the other along I-5).  You have to have a friend watch the web site and grab your photo standing in view of the camera.  I haven’t had that level of coordination yet 😉

Virtual caches are a grandfathered type where there is no actual container – just observe something and either answer questions posed by the cache owner or take a photo.   These are great for historical areas like Gettysburg (where you can’t/wouldn’t want to hide containers), though there are also gems like observing ingenious yard art.  These and web cams now show up on the completely different Groundspeak web site, waymarking.com.

Earth caches usually involve answering questions after receiving a lesson in geology or history.  I love them.  For example, while at a conference at Penn State, I did a tour of the Centre Iron Furnace.  The requirement to log it was a photo and compute how much iron it produced at its peak.  I made a math error (see, Scout, it happens!), but the owner credited me with a find anyway.

There’s a nearby Earth Cache concerning the Lake Sammamish Sunken Forest, which by title alone, sounds cool.  To reach it, I will need to procure access to a canoe or small boat.

Benchmarks are land-based markers placed by the Department of Interior, USGS, or others.   It’s pretty hard to find the correct benchmark because the textual description was written decades ago and often has not been updated in the last 20 years.  Many people – myself included – mistake triangulation markers for the actual benchmark.  Furthermore, the actual benchmark may be on private property, buried, destroyed, or inaccessible.

So now the stats… Over half of my cache finds have been within ten miles of home.  It’s pretty easy to see the areas I frequently commute:

What’s most mind-boggling is there are another 1000+ caches in the ten mile radius.  It’s been increasingly difficult this time of year to find the time to alter my route enough to pick up other caches.  The complete lack of daylight this time of year hasn’t helped.

All of my finds are in the conterminous US.  During October’s travel binge, I seized the opportunity to do some states in the east.  The lone cache in Illinois happened to be a virtual cache at O’Hare Airport.  It was nearly 1.4 miles walking … indoors:

States cached as of November 28

I hope to spend an afternoon geocaching in Florida not-snow the week after next.

(Update:) Since someone asked, the only truly awful geocaching experience I had was with a local cache.  The glass (!) container was originally hidden in a tree, but the tree blew down two years ago, making the coordinates dicey and an area a vegetative mess.  The blackberries were terrible – I had a hard time believing someone would put a cache here.  There was also a lot of “garbage.”  Later, another geocacher posted this was from locals who partake in nocturnal, freelance outdoor chemistry furthering their personal pharmacology intake.  In other words, crack/meth.  The cache is, thankfully, archived.