Our friend Amy, who’s the heart and soul of our Camp Fire chapter, solicited ideas for an Arbor Day project. Someone suggested building bat houses. After some investigation, this seemed relatively straightforward project for the kids to undertake. (I think this model was similar in scope.) Some materials were purchased.

Meanwhile, she called the local city, asking if they’d be interested in erecting the bat houses after we built them. They passed the request along to the parks and wildlife department, who then involved Bats Northwest, the local equivalent of Bat Conservation International. Bats Northwest felt that if we were going to build bat houses, we needed to make some changes suitable for the local bats’ preferences.

This preferred model is much more involved. Had any of us known how much work this was going to be, we would have picked another project.

Home Depot graciously donated some of the materials, but the additions have been costly. Amy’s invested an incredible amount of time writing grant proposals to pay for this and, hopefully, those will come through anon. 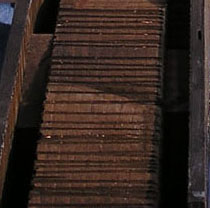 Meanwhile, with Arbor Day approaching (the second Wednesday in April), we needed to start assembling stuff. When they looked at the revised specification, it was apparent that the bats needed rough surfaces to climb up the bat house. Amy’s husband scored all of the poles with a hand saw and then carved out the notches at the top. The picture below is only a one foot chunk of the pole. Mulitiply this by six feet of pole, times ten bat houses. Lots… of… work…

On Sunday, several of us met to help the kids assemble the houses. Since there were no instructions, other than the image above, there was some debate on how the items would best go together and, more importantly, how the kids would participate. I got a little impatient waiting for concensus and started work while the others were still discussing it. I had the initial three-sided outer portion done enough to convincingly demonstrate how the rest would be put together.

The kids’ contributions were limited to gluing or screwing, usually with the help of a supervising adult and power tools. The younger kids rotated in first, lost interest quickly and were content playing in the nearby sandbox. The older kids hung in there. Eventually we got proficient at cranking the completed models out. The only thing left to do is paint and shingle the little roofs.

One proud parent (or potentially sexist — you decide!) observation is that the girls all had a good feel for using the power screwdriver (my drill with the phillips bit), easing back on the power when the head of the screw was nearly flush with the wood. In contrast, all but the oldest boy operated the device in binary fashion: off or full-throttle, wood-crunching extreme power drilling.