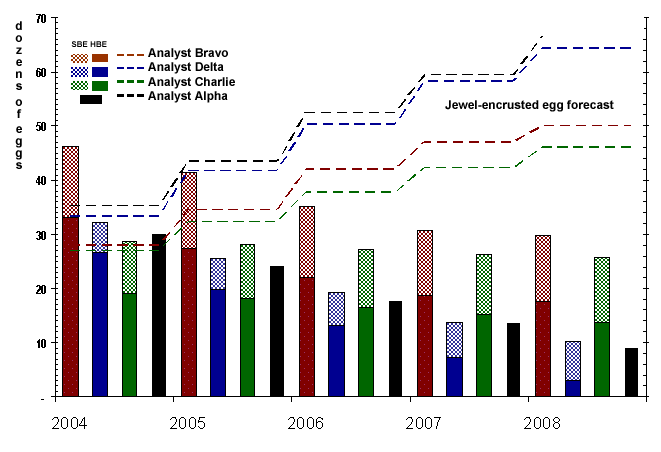 You don’t have to be an analyst to see that Analyst Bravo thinks the hard- and soft-boiled egg market is going to remain strong. Last month Analyst Alpha, who only reports on total boiled eggs, adjusted their 2004 and future “forecast” down about 20% from where they were last year. Their estimates are similar to Analysts Charlie and Delta. I’ve also manually corroborated the estimates with the third quarter financial reports. Much like the dry Pancake Mix market, four major players serve 90% of the market. In the next two weeks, I’ll have another set of annual reports to pore through and I don’t expect a miraculous upswing in the market: after trying jewel-encrusted eggs, no one goes back to mere boiled. Switching among boiled egg suppliers is very easy as there’s little practical differentiation. (Sure, some paint letters on the eggs or dye the shells or even use paper cartons. Customers see these features as gravy.)

Late Friday, I was called into a meeting with my manager and some Dairy Development guy who’s got some questions on my analysis. By “questions,” I mean he “disagrees vehemently with.” I went through the spiel explaining where I got my numbers from and why I did what I did. For example, Analyst Charlie also includes sunnyside-up and poached eggs in their forecast; I removed these to make it easier to compare. Their estimated decline in the market seems too flat, though.

After a bit of back-and-forth questioning, his concern is I’m making an “apple-to-orange” comparison. By “apple-to-orange,” he means I’m using actual hard- and soft-boiled egg purchases, and not the multiply-rounded up numbers appearing in the industry rags like Eggseller Monthly. These are typically 20% higher than reality. He kind of had a point that if my initial assumptions visibily differ from the incorrect, but generally bought-into numbers, the uber-executives are going to get hung up about it. I know each vendor’s reality distortion factor, so it’s easy enough to inflate the forecast.

His next issue is my assertion that Analyst Bravo’s estimates are off. (By “off” I mean “wrong, probably calculated while smoking hash browns.”) He was unpersuaded by three other analysts suggesting Bravo is high. Or that the specific 10-Q/K filings I can produce saying the market is no longer cooking. Or that our own boiled egg consumer base is runny and also overrepresented in the research. Perhaps by accident, he relates the true concern: “We paid a lot of money for Analyst Bravo’s report.” Sensing I may be having difficulty controlling the First of Death, my manager offers to meet with another group with whom we can vet our numbers. After Dairy Dev guy left, she said she thought my data was well-done and assumptions sound. She also said Dairy Dev has always been difficult to work with.

I hate perpetuating bad assumptions, but there’s no incentive to make a crusade out of convincing people their models are flawed.
This seems like the analysis-equivalent of schedule chicken.

As Director Mitch had noted, I’m not mad because (a) I’m older and (b) I know this is the way things work here. I’ve seen a few recent occurrences where documents I authored came back (to my manager) as “good research another group has done.” It’s weird reading a long thread tracking how information flows, but it helps that the people involved don’t alter the document properties. If I can elevate awareness of our group’s good work, I can convert that into political equity.