I was invited to participate in a “geo art” project for the Washington State Geocaching Association’s (WSGA) anniversary. Though my contribution was pretty minimal, I did want to jot down some thoughts on what work went into doing this and why I think it was a success.

Geoart endeavors to draw or spell out something when geocaches are viewed on a map. For example, this was a series of 42 puzzles and a bonus, laid out just prior to Geowoodstock VIII, held in the greater Seattle area in 2010:

Or this smiley face northeast of Los Angeles:

Or this awesome fighter jet west of Mountain Home, ID:

A handful of us met in June to discuss options for doing a giant “WSGA” to celebrate their tenth anniversary.  It was pretty surreal seeing how some folks were tightly focused on the appearance of the lettering at different map resolutions and points per letter and a reasonable font.  I was so glad I had my iPad on me so we could look at the results on a live screen. The magic number was 54 caches to spell out WSGA in reasonable clarity.

With that out of the way, we researched candidate locations. The constraints were as follows:

The last point is pretty important.  A local example of a series in Bellingham, “NUTS” was copied near Camano Island to spell “BUGZ.”  I think.  This is what’s left of it today as locations were flooded out and/or owners left them unmaintained:

Three candidate locations emerged.  One required taking a ferry, the other was in the mountains.  It’s hard enough to get people to maintain their caches that adding a trip to it is a deal-killer.  The remaining option was in southern Lake Washington, leaving us the question whether we could identify 54 locations confirming to the above limitations.  Since I have some familiarity with geoprojections, I sketched out crop circles. 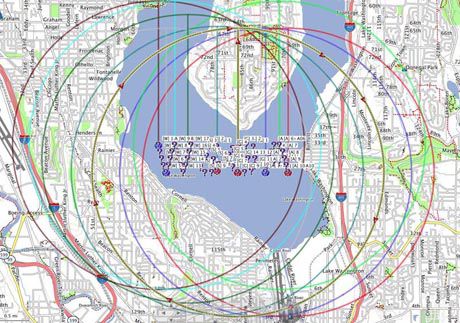 So I had the easy part.  A group of other folks volunteered to scope out candidate locations for the physical containers.  Had this not happened, we’d … be planning the project for the 20th anniversary.

With the general locations scoped out, they sought help from a volunteer reviewer to put “dibs” on the spot, lest some random additional cache would pop up in its place.  Prying Pandora was really helpful in this regard.  Next, they sent out inquiries to various cachers to determine their interest level in creating — and maintaining — puzzles.  74 people were asked, 38 accepted

I was assigned two puzzles and given six weeks to get everything in place.   That sounded like a long time back in June… then finally at the end of July, with the deadline looming, I visited each general location a few times to scope out what I’d do with it.