While I was driving around Tucson, I was struck by how differently the traffic lights sequenced.  (Phoenix didn’t seem to have the noticeable differences.)  Consider this intersection of Some Boulevard and No Way: 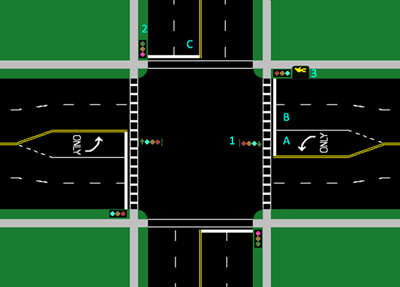 Some Boulevard is the moderately-trafficked arterial going left-right. In this intersection, left turns have to yield to oncoming traffic. The pedestrian crosswalk is better marked. Were it busier, the traffic signal at point (1) would have a red left turn arrow (indicating no turn is permitted). It might also have a dedicated right-turn lane. Currently, the pedestrian crossing signal at point (3) indicates it is safe for pedestrians to cross No Way.Starting with a green light (1) and active pedestrian signal (3), the traffic sequence here might typically be as follows.

I made a few “hard stops” trying when the light changed from green straight to red.  I also observed the timing of the lights is set up so you can go east-west a lot easier than north-south.  My childhood perception that it took a long time to go short distances seemed to hold true during this visit.