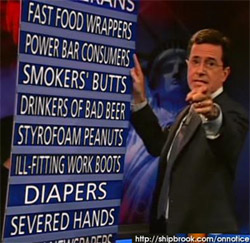 Saturday morning, I helped with the Seattle Randonneurs “Adopt a Road” litter pickup.  Combined, we picked up sixteen moderate-sized bags along a stretch of East Lake Sammamish Parkway from LouisThompson Road to 28th ST NE.   In the two bags I filled, the most frequently found item was cigarette butts.  Styrofoam peanuts were the most obnoxious because they break when the picker-upper squeezes them.  There was also a lot of “biker trash” — wrappers for Power Bars and Clif Bars and goopy gelatinous flavored syrup.  Nearly all of the beer bottles picked up were of a cheap, domestic variety.

Around noon, I headed down to Newport library for a geocaching tutorial on “paperless geocaching.”  I’ve mentioned this before,  but my GPS currently holds ~20 characters of information per geocache.  When I have the foresight of carving out time to geocache, I’ll bring a stack of printouts in micro-font.  Unfortunately, even that has limitations: inkjet output runs when it gets exposed to the Pacific Northwe’t moisture farm.

The first presenter went over various  methods that gravitated to purchasing an old (and cheap) Palm Pilot to store the cache pages on.  I’m was already averse to having to lug another device around.   I completely lost interest when more than one person remarked they had lost all of their data (in the field) when they the device needed a battery change.  I’m sure that would happen to me three or four times in a row.

The second presenter discussed ways of using “less paper” through clever use of  GSAK.  The “Geocaching Swiss Army Knife” is a shareware program that most of the obsessed use to sift through and upload caches to their GPSs.   GSAK is powerful, which is also an euphemism for “parts are frustratingly unintuitive, but thank goodness it has a big user base to help out with it.”  I learned there is a way to store metadata such that I could later create a query that could exclude caches requiring a boat.  (I’ve been doing this through a cumbersome series of queries.  For example, I omit everything with a terrain rating of 5 (“special equipment or death wish required”).  A “disadvantage” is it excludes notable local caches like “Crazy Monkey Tripod.”  (How many people would climb a 50′ fire ladder in the woods?  None!  How many would climb that same ladder if there was a small tube with a log book hanging from the top: A lot more than you’d expect.))

At the end of the class, I asked another geocacher about a multi cache that he found but I’ve been unsuccessfully hunting for for several months.  It’s a three-stage multicache, originating at the top of a pedestrian overpass crossing I90.  Yes, Interstate 90. Because hunting around on this thing for any prolonged period of time is sure to spook the torrent of cars below, potentially attracting unwanted attention from The Authorities, I’ve been restricting my searching to a few minutes at a time.  Several times.  After logging three “DNFs” for posterity, I’ve not done so because it would be pointless.  Yes, it’s hard.

Last week I noticed something new (see left – it looked like 343), but it was weird enough that I wasn’t sure if what I was “seeing” would lead me to the second waypoint (that is allegedly just as hard as the f irst – joy!), or if I was just seeing order in chaos, kind of like those people who see Elvis in a grilled cheese sandwich.

A lady heard me describing what I found and asking “Am I on the right track with this?” and promptly launched into a tirade on how “some cachers cheat.”   I listened for a few minutes, then decided it was a No Win Situation.   Where’s Susan Dennis’ “Talk to the Hand” icon when I need it?

Tonight, I found a cache (GC10HEJ) called the “Unofficial Geocaching Rules,” from another cacher who was frustrated by others trying to impose their rules on him.  My favorite three from his tongue-in-cheek “rules:”