I don’t watch much television , but when I do, it’s because my Tivo’s found something cool.  Like: last night’s introduction to RFIDs by Dr. Chris Diorio, chairman and CEO of Impinj[5]. His presentation is available online[1], so I will just summarize some of the things I learned.

Who wants them?
Business! Among the benefits:

The potential market for RFIDs was described in the Trillions (Texas “T”).

Passive tags are of most commercial interest.

An active tag has a battery: it’s essentially a radio. They’re larger (120 x 100 x 50mm), operate at higher power, considered more reliable and better suited for water-based environments like people[2] or large objects that would be interrogated from far away (think: shipping containers). Battery life is 5-10 years.

Because passive tags do not have batteries, they’re smaller, cheaper, and have a potentially unlimited lifespan. Their power comes from induction in the antenna occurring in certain frequency ranges. Interrogation ranges vary from a few meters up to 100+ meters[2] on the newer chips. The tag is a tiny chip about 0.75 mm attached to a piece of paper. The antenna is silk-screened on with conductive ink.

Wikipedia[2] mentions semi-passive tags that use a battery to power the chip, but inductance to send information back. 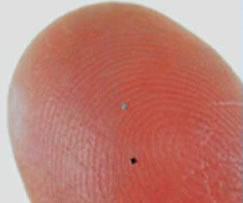 The grain-sized Impinj ZumaRFID chip field-writable, with an 25′ read/18′ write range. (The protocols limit the reader to identifying 500 tags per second.) They get about 40,000 of these chips in one 8″ semiconductor wafer. The sample wafer shown had a lot of empty space on it, presumably for testing chips.

The antennas are the largest part of the package[7]. The reader can process up to 500 RFIDs per second[1]. However, success rates in the field are still in the 80th percentile[2], slowing the adoption by large agencies like Wal-Mart and the Department of Defense[6].

The communication protocol was described as being analogous to the reader having a flashlight and tag having a mirror. To send information to the tag, the reader modulates the “light” sent to the tag. To receive information, it holds the light constant while the tag uses the “mirror” to reflect or not reflect. (The tag returns its electronic product code by reflecting incident RF.)

Then there are the logistic problems… The reader must be able to identify all the tags present in the room. The tags are essentially blindfolded, nearly deaf, talk by whispering, and cannot hear each other. The reader is blindfolded, doesn’t know who’s in the room (because the tags, if present, are all powered off), can’t listen to more than one tag at a time, and needs to yell a million times louder than the tags can respond. Furthermore, since the reader broadcasts with enough power to be observed outside the retailer’s premises, it cannot say the tags’ names, lest the retailer’s competitor learn what she’s selling.

The example algorithm he presented was showed how the set of numbers was exchanged without the reader calling the chip by name. Once identified, a chip is asked to go to sleep so it doesn’t cause collisions. (He didn’t elaborate on the mechanism to handle multiple responses, though it sounded like it was a variant of the Ethernet CSMA/CD scheme: if there are collisions, both parties wait for a random, exponentially increasing period before trying again.)

There were additional tricks needed to deal with the physical issues with the silicon. For example, very cold conditions can make the RFID chips stay “asleep.” If something was scanned before being loaded in a truck in a typical Minnesota winter, it might take half an hour for it to warm up enough to turn on.

Many of the passive RFID examples assume they’re on a non-metallic and/or dry surface. RFIDs being implanted (!)

There are a lot of privacy[9,10] and security[8,11] concerns.  I haven’t read through this literature; however, I have the urge to cough *bullshit* whenever I hear “uncrackable” mentioned.  Such as [8].   I don’t know how much to make of the problem, though, as people apparently put highly personal stuff on Facebook because they believe it’s secure.

And health concerns.  RFID reader transmission power is in the 900MHz band, and of the power of 2 cell phones, but is not held against your head.  Diorio asserted that this background radiation “acceptable health limits.”

There needs to be a critical mass for these to work. Some retailers have run into slow adoption. For example, Wal-Mart[6] has only 600 suppliers out of 20,000 using RFID technology.  Sam’s has recently imposed a fee for suppliers not using them.