Yay – the search is over! I went to a shop to get a test ride of a Cannondale T2000 touring bike. The guy working the floor suggested I try the Cannondale Synapse “Northwest Edition,” a variant I hadn’t heard of before.
As described on the Montlake Bicycle Shop page:

[The Synapse Northwest], a sport touring road bike designed for Cannondale by MBS owner Neil Wechsler [i]s a wonderful blend of performance, quality, practicality and value. the Cannondale Synapse Sport frame is light, lively, and handles beautifully. The Shimano Ultegra STI shifters and XT rear derailleur make shifting smooth and reliable. The biggest differences between this and similarly priced lightweight road bikes are that The Synapse NW climbs hills very easily due to its “touring bike gearing” and that it easily fits fenders and a rear luggage rack.

That’s what I’ve been looking for.

Aside from being a demanding, fussy customer, there are two primary reasons the purchase took as long as it did.

First, as an unanorexic, middle-aged dude who likes riding long distances on hills and in comfort (i.e. without pushing the extremely high gears), I’m not a demographic bicycle vendors market. I was reminded of this while thumbing through Bicycling Magazine’s “Annual Buyers’ Guide.” There are hundreds of bikes for young hard-bodies. If, for some reason, I need to shave 36.9 picograms of mass for a ride, I would do that by passing up the free fresh bread sample at Great Harvest, not by retrofitting my bike with Dura Expensive.

What I was looking for was a road bike with mountain bike components. The closest thing to this is a small niche called “touring bikes.” There are a small number of “off-the-shelf” bikes like the Trek 520, Cannondale T2000, and REI Randonee.
Also available are custom bikes like the Rodriguez Adventure, Bruce Gordon BLT, Rivendell, Surly Long Haul trucker, Co-Motion Nor’Wester, and so on. These are nice bikes, but the the small niche and customness means there’s a dearth of inventory to test ride. Quoting from the Surly site:

Unless a shop has your size in stock, you’ll have to rely on our website with detailed geometry charts for each model. Print these out and compare it to your current bike or another similarly sized bike and figure out what size most closely matches what is comfortable for you (top tube and seat tube lengths are the most critical).

The problem with detailed geometry charts is they’re uniquely non-standard. One bike maker measures the seat height as distance from the seat apex to the ground, another measures it to the center of the bottom bracket, a third computes the intersection of the 90°F intersection between the vertical rise of the bottom bracket and the horizontal of the seat. Even the professional bike fit isn’t using the same numbers. One could go insane. From the charts alone, I would have never guessed I’d need a “6S” Rodriguez, 57cm Randonee, “Large” Cannondale T2000…

Second, the weekend is not the time to shop for a custom bicycle. As I wrote last year, I came close to purchasing, but was stymied when a shop was too busy selling $4 inner tubes to take my order or provide specific answers to some concerns. “Yes, I know that given enough time, money and flying monkeys with typewriters, anything can be done. What I want to know is how many monkeys.” It’s the classic time-versus-Shakespeare trade off.

I looked into the custom bike option on several occasions, but the lack of knowledge among the weekend staff was very frustrating. A few weeks ago I found an almost-great bike on the floor of an Eastside. Though it was at the top-end of my budget, it just needed a smaller crank and I would have been good to go. This seemingly simple change triggered a cascade of equipment incompatibilities, rapidly surpassing the knowledge of the person working that afternoon. If she had said “Gosh, I don’t know. May I take your contact information and have someone call you to discuss this further?” I would have pursued it further. Instead, she said “Why don’t you do more research and then make an appointment?”

I did research more, realizing that there are stock bikes at half the price that have solved the same technical problems.

I intend to replace the cracked wheel on the ‘Friday because, as Chris said:

You need more bikes, then it would take much longer to wear out parts.

For archaeological interest, the picture below is my Cannondale RS600 bike in Hopelessly Overloaded Self-Contained Tourist Configuration (circa 1991, leaning against a pole at Lake Montesano State Park). I made to Astoria with this load before leaving the gallon of gas at the camp site and mailing 15 pounds of stuff. 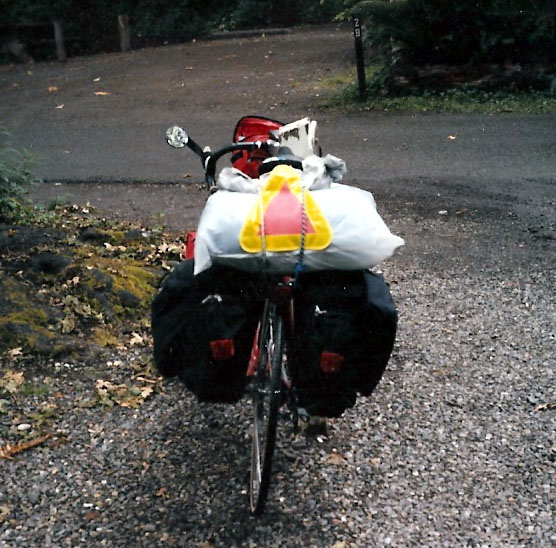