Because I’ve been blessed with good vision, visiting the eye doctor hasn’t been a high priority. However, lately I’ve become more aware that the zone of focus for close objects is now approaching the limits of my arm length. Since I had a little money leftover from the pre-tax medical savings account, and my calendar year “vision plan” expires today, I went in for an exam.

.
The lobby was quite nice: spacious, open and, like my dentist’s office, adorned with Orwellian images displayed on the large, flat-panel screens hanging on each wall: 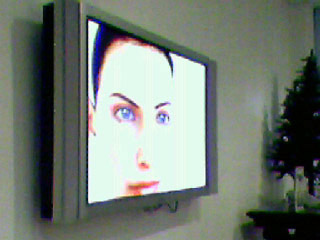 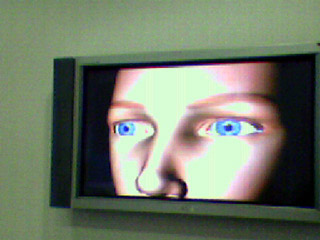 It’s a shorter loop, with material on glaucoma treatments, LASIK, lens implants and the benefits of regular flossing. Okay, I’m kidding about the flossing part. It seems odd sitting in an office, eyes watering from the numbing drops, and watching infomercial TV.

The doctor’s web site was very up-front about the additional options available that wouldn’t be covered by insurance (“so don’t ask”). For example, there was a $350 option including “computer-guided corneal mapping, computerized peripheral visual field testing, ultrasonic pachometry, fundus photos and other photodocumentation as required.”

One of the more intriguing was having a digital photo taken of my eye. Last year, my dentist stopped the filling long enough to show me an extreme close-up of the bacterial caries action going on in my upper bicuspid. How could I resist the guided tour of my retina? There were two other reasons I did this:

1) to avoid the dilation drops. At my last appointment ten years ago, I had the dilation drops and got very queasy from the extra light input. I also hate the spooky, undead look of 100% pupil dilation that seems to last the rest of the day.

2) see what’s inside. I was serious about seeing the inside of my own retina. (Having a baseline image is logically useful.)

The imaging was quick and much much much much better than those drops. It’s like having a green flash headlight shine in each eye. The residual is far less than a camera flash. When I asked a bunch of questions about the images, the doctor got excited and showed me several of the filtering options available. I even got to see the reflection of a floater. We got along well.
In a nutshell, my distance vision’s great. Near-vision is okay, though it’s causing fatigue. He suggested I consider reading glasses or, if I’d prefer to wear them all day, bifocals. The vision service plan covers a free pair, but nothing Elton John would approve of. Since they’re part-time, I didn’t need the teflon coating or gamma ray filtering.