In my particular line of work, I get to see a lot of scientific data representing fluid flows or structural mechanics. They’re all interesting, though I have to admit seeing Yet Another Mach Yatta Whoozit lacks the pure excitement it did a year ago.

Luckily, the analyses my product offers are applicable in many other disciplines. For example, earlier this year I was working with a researcher studying rat lungs. Though I was subconsiously hoping for an immediate relevation that would address some invasive homeowner issues,
the science nerd in me was stoked at seeing the analyses capabilities of my product being used in different ways. To be sure, there were some subtleties that we have to address, but watching sample particles flit around as the rat breathed was fun. 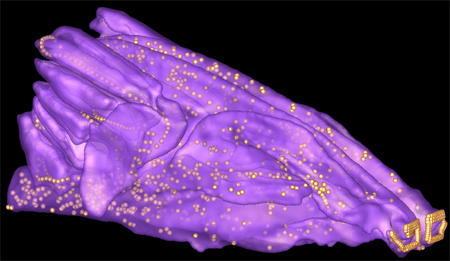 We’ve been working with a simulation company whose area of focus is a departure from the traditional aerospace sets. Among the interesting animations shown at their big user shindig last week was one of a toilet flushing. The appreciative crowd reveled as the animations done with and without “massed particles.”

They’re sending us a copy of the dataset next week. The anticipation level in the office is far greater than it was for Snakes On A Plane. We science geeks have a quirky, sometimes crude sense of humor…

And for those of you who have read this far, here’s the “clean” version. (Fluash required; the data file was 13Gb and only eleven timesteps. I’ve slowed the animation down to a few frames per second. Firefox will show it in loop mode, which I suppose is better than “poop” mode. 🙂