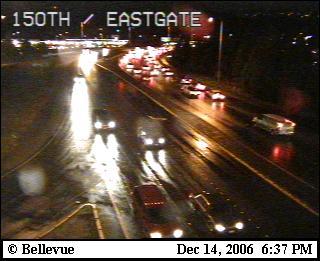 Last night’s ride home was a doozy because of the torrential downpour… easily the wettest I’ve been since RSVP 2004. The wind started kicking up around 5:30, knocking out power to the street lights. A tree had fallen across the road a mere 1/4 mile past the entrance to my subdivision.

When I woke up, the yard is covered with a layer of pine needles. The back deck table and umbrella speared the grill. The sand box cover has blown off into the green belt behind us. The house across the street’s animatronic “Rudolph” festive lawn ornament was taken out by several stray branches.

Three weeks ago, streets were marginal because of snow and sand. Today, it’s trees, pine branches, garbage cans and construction cones. It took me a long time to drive into work. I stopped at the Albertson’s at the top of the hill in hopes of getting something to eat while I waited out the traffic. There were at least twenty people queued up in line for the now empty coffee pump. Both gas stations had power and long queues of people fueling up for the weekend.

The parking lot at work was nearly deserted. Not only is the building locked, but the entire block is powerless. (No coffee, either!) Our corporate servers are also shut down. (No VPN for you!) 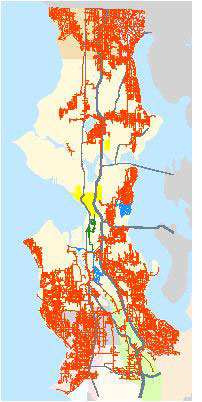 Ted posted the map of outages in the Seattle area. (Orange dots indicate problem areas?) I’ve not found a similar map of the eastern side, but this was posted to Puget Sound Energy’s web site:

[…]The massive windstorm that hit Western Washington last night knocked out electric service to more than two-thirds of Puget Sound Energy’s customers. The storm’s destruction appears to be as severe – and may even be worse – than the memorable Inaugural Day storm of 1993.

As of early Friday morning, we estimate that more than 700,000 of PSE’s 1 million-plus electric customers lost power. The outages extend throughout our Puget Sound service territory, from Thurston County north to Whatcom County. King County sustained the greatest number of outages within our Puget Sound service area, and all of Island County is currently without power. Extensive outages for PSE customers also occurred in Skagit, Pierce, Thurston, and Kitsap counties and, to a lesser degree, in Jefferson, and Whatcom counties.

With overnight gusts reaching 70 to 80 miles per hour, falling trees and limbs have damaged or knocked down power lines throughout PSE’s service territory. We strongly encourage people to stay home today, if possible, and not venture out on local roads because of the potential to encounter downed, electrified power lines.

Continued strong winds and debris-strewn roads this morning are slowing PSE crews’ ability to assess the storm’s damage and begin the restoration effort. We can’t yet provide any reliable estimates on how long it will take to restore our customers’ power. We do know, however, that it will take numerous days, perhaps a week or longer, to get all customers’ service restored.[…]

Our assessment and repair crews are focusing initially on re-energizing the numerous high-voltage transmission lines damaged by the storm in order to restore PSE’s backbone power-transmission grid. This will enable PSE to restore service to large blocs of customers. Concurrently, our crews are focusing on restoring power to substation circuits and then to smaller feeder lines serving a fewer number of customers.

Update: 1:30pm – While I was raking up the pine needles in the front yard, a bunch of trucks rolled up to fix the damage to the house across the street. A tree had fallen on the backside of the house, into their oldest kid’s room. No one was hurt, thank goodness.
Fred Meyer (grocery store) was packed with people stocking up on canned goods … and beer. The store was running on generators: registers worked, but the conveyor belts didn’t. Lighting was very low. All of the frozen and refrigerated food cases were covered with plastic wrap.

Update: 6:30pm – We took cookies to the affected neighbors. Thank goodness
I’m not traveling. Both newspapers lacked print editions today. Corporate servers are still down. According to the latest update, 80% of Bellevue is without power.

Update: 9:30 am (Saturday) Albertson’s in Bellevue, one of the few grocery stores with power, was doing a brisk business. The shelves and produce section are extremely picked over.