Java, the “write once, run anywhere” language marketed as salvation from programming faux pas*, has its own, manic updater for the runtime version. In their case, “updater” really means “install subsequent versions of itself.” For example, on my work machine, I noticed this:

No, I don’t know what happened to Updates 7 and 8.

According to the Java Runtime FAQ, this is desired behavior because “there might be some applications or applets written and tested against a specific version.” The FAQ later suggest if you’re low on disk space, uninstall the interim versions. Gee, thanks! How about you just uninstall the broken ones so I don’t have to?

I found where I can disable updates:

but when I unticked the box, an ominous message popped up:

So Java is secure, except for updates, which are more secure, and platform independent, as long as each platform has the very specific version of the runtime environment, in addition to the current, more secure one… unless the government changes daylight savings time.
Applications written in Java benefit a user how? 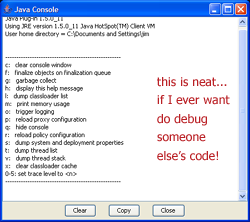 When browsing pages that use java, there’s often a 15-second lag as the system starts the Java machine and interprets the applet’s byte code. Some applications take longer as they attempt to load every .jar file available, (*cough* certain HR applications named after the Klingon home world *cough*).
As if that weren’t annoying enough, a Java Console window pops up, just in case an end-user wants to debug a web-based java application. Shutting off this console window can also be done in the control panel, here: 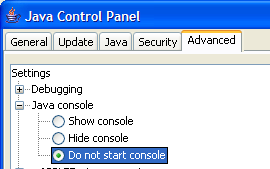 On another topic, I find xkcd very amusing: 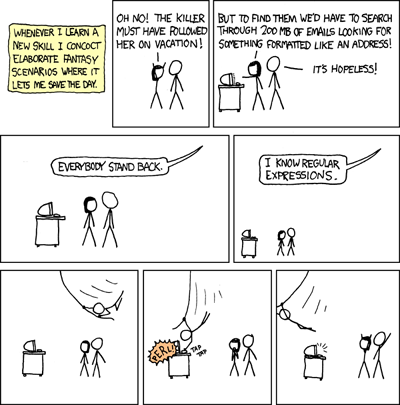