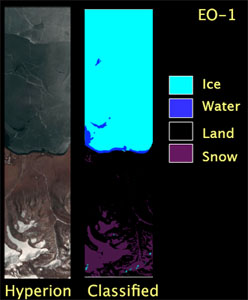 It’s was serendipitous when I found out a friend of mine would be teaching a Machine Learning class — her specialty — and her lectures would be recorded for posterity and she generously offered to let me “play from home.” How could I not seize the opportunity?

During the fourth lecture, when she posted a slide showing work on orbital classification of land features. The strip on the left[1] is an image taken from the Earth Observing-1 (EO1) spacecraft using its Hyperion instrument. The strip in the middle is the result of a computer-derived classification of the image.[2]

With my interest piqued, I spent the better part of a Sunday sleuthing around to find out more about the spacecraft, what it was observing, and how the results were derived. Today, I’m just interested in the gadgets. When I have a better handle on the analysis of images, I’ll post more.

Why I mention Landsat 7 first is its instrument, the “Enhanced Thematic Mapper Plus,” has been calibrated to better than 5%[4], meaning Landsat 7 serves as the benchmark for other instruments, like…

Earth Observing-1 was launched on November 21, 2000 into an orbit such that it flies in formation with Landsat 7. By following in the same orbital track, and within a minute later, both EO-1 and Landsat 7 effectively observe the same things. Landsat 7 is thus being used to validate EO-1’s technologies.

EO-1 has three major banks of instruments to test:

The EO-1 spacecraft has a couple of 12MHz processors (8 MIPS), one assigned to primary spacecraft operations, the other for processing images. The processor and limited memory (not enough to boot Windows Vista) limit the data processing that can occur. In the very first image, it was noted only twelve bands can be accessed at a time[2].