Since I’m starting a new major project, the family wanted to spend a lot of time on a staycation this weekend.  One of the activities was a field trip to Creation Station, a store with, well, bunches of stuff that you would have tossed out, except when you see a lot of them neatly arranged, it starts to inspire thoughts of making random art.  For example, in part of the store are barrels full of, say, wine corks, 35mm film canisters, cardboard circles, ceramic tile squares, rubber straps, braids of wire … stuff.   They’re priced on the barrel – for example, film canisters were 10 for $1 – or you can fill various sized bags for a flat rate.   (My advice: you really want to do this.)  As you wander around, it eventually makes sense: this stuff could be used to make artsy projects.

The other parts of the store continue the potpourri, just not at bargain bin prices: multi-colored pipe cleaners, beads, insect finger puppets, glitter, pipettes, googly eyes, flexible hosing, 2mm sheets of foam, ping pong balls, ceramic emollient jars (sans emollient) … you get the idea.   We left with ~$40 worth of raw materials for an evening of just messing around with our hands.  It’s cheaper than a movie.

My contribution was the thing below.  Being the token male in the household, I had to break out the drill.  The eye stalks are cut pieces of bicycle cable housing that I happened to have lying around in the garage. 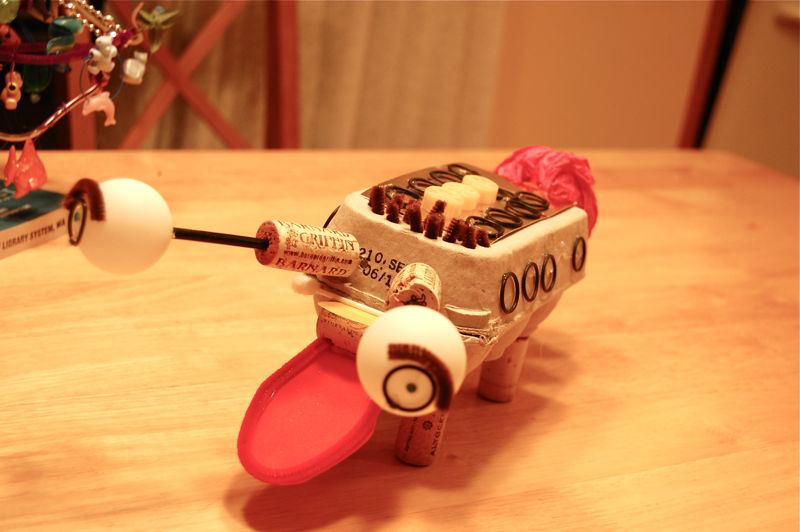 An interesting side effect of doing this is I started thinking about other sources of materials that could be used for future projects – because ideally, you just break out the bin O’ random stuff, and have at it.

Today, we were in chores mode.  Mine were focused on tidying up the man-cave.  One I’d been putting off freaking forever was dealing with a stack of former hard drives.  These had all been salvaged from ex-laptops, desktops, external backup drives and a modded ReplayTV.  Since I’d lost track of what data was on which drive, I’d just kept them all for fear of the device providing future generations with access to CSI-like techniques knowledge of just how boring I am.

Since I was in art mode, I thought it’d be fun to crack open a drive, show my kids how it worked, and then try to salvage the platters.  If you try this at home, you will need:

Step 1: In the next room, put your wallet, working computer, and anything else that really should not be exposed to powerful magnets.

Step 2: Using the Torx #6, remove the six obvious screws on the top of the hard drive. Don’t try prying off the cover just yet!

Step 3: With your finger, feel around the label for a round indentation or look under the sticker labeled “Remove this and you will void your warranty.” (I’m sorry, I stopped paying attention after “Remove this.”) Using the flat-blade screwdriver’s pointy part, scrape off the label.  My Hitachi drive had two other screws partly obscured by its label.  Dig those out, too.

Step 4: Remove these 1-3 screws.  Now, using the flat-blade screwdriver, gently pry around the side.  There should be no resistance.

Step 5: Grab the center spindle and rotate the assembly.  If it has any resistance — as mine did, because that’s why the drive broke — you may need to gently jiggle the sensor array (the pointy thing to the left). Just for fun … plug the drive into power.   The platters should start spinning up.  In photo 1, the label says the drive is rated at 7200 rpm – moderately fast.   If you’re lucky, you may see the sensor heads trying to seek back and forth.

I had my kids in to see this because I think it’s cool, and I don’t want them to fear taking something apart in hopes of fixing it.  I probably could have come up with a better alternative to slowing down the platter by placing the screwdriver on the edge.

When the drive accesses data, the disk is spinning at a constant rate — for this drive, 7200rpm or 120 revolutions per second — and the head moves in and out.  Effectively, what happens is the desired chunk of data will eventually be under the head.  (This is a better representation.)

Step 6: For visibility, remove the upper platter.  This drive has two 3″ platters and a sensor head on each side.  Thus, each platter is 125Gb, or 62.5Gb per side.   It’s about a million times denser than the hard drives when I was a freshman in college.

To remove the top platter, you’ll need to take all six screws out of the centerpiece.  This is pretty hard because the drive wants to spin.  I found (a) holding its edge with a finger, then (b) using a pair of Vice Grips for leverage to rotate my driver tool helped immensely.

Step 7: the pivot point of the head arm can be removed rotating the inner piece counter-clockwise with a flat blade screwdriver.  Next, pry off the chip from the bottom-left.  The head should just come right out.  Once this is done, the second platter will come out.

This is a horizontal view of the head assembly.  This is the most fragile piece on the assembly as each head is designed to float just above the spinning platter.

Step 8: Admire the destruction.  Rub the rare earth magnet in random circles and directions on each side of each platter.  Data is now erased.

After taking apart four drives, I have a ten platters and several other interesting looking metallic parts for a future project.