Day 4: Lake Selmac, OR to Glendale, OR – With the big hills out of the way, they ratcheted up the distance. But by now, I was feeling pretty good. I got to wondering how much better I’d feel if I did a ride like this at the beginning of the season instead of the end…

Day 5: Glendale, OR to Grants Pass, OR – Looking at the map, this would be a 25-mile ride, but we would have missed out on scenery. Besides, we’re here to ride.

Day 6: Lounging around Grants Pass – This was our rest day. I spent the morning picking up geocaches along the way … until I got careless and tripped into some poison oak, imagining Poison Oak Cooties everywhere. I washed my calves and ankles at the rest stop. Later, when I was wandering around downtown Grants Pass, I found a pharmacy selling the magic poison oak removal cream.

Grants Pass had pulled out the stops for our visit, including passing a waiver for tent camping in Riverside Park, offering shuttles into town, and arranging for a bike corral.   The Evergreen Bank Bear Hotel had ornate displays lining the sidewall to the park:

Grants Pass is the sister city of Rubtsovsk, Russia:

In the late afternoon, I took a rafting trip with Rogue Wilderness Adventures. It was originally a shared-raft trip, but since I was traveling solo, I had the opportunity to take a kayak instead. One problem with being the last group of the day is we inherited everyone else’s lateness and disorganization.

Day 7: Grants Pass, OR to Medford, OR – I chose to do the shorter, 42-mile loop in hopes of getting back on the road and home that same day. I was on the road very early, happy to catch this great sunrise in Murphy, OR. The sky is on fire:

Further along, there was … um… nevermind.

And finally, the finish line: 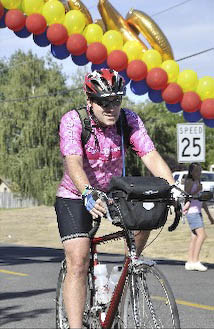 Overall, this was an enjoyable week!   If I changed anything, I’d have preferred the two layover days like we had on last year’s route.  Not having to deal with administrative things means more time to explore and play!

Route support was excellent.  I especially appreciated Chuck playing classic rock tunes on the long climbs.  Jeff and Vitaliy were awesome in looking after us!