An interesting facet of the conference I’m attending is each subset has a “lightning round” whereby the presenters have one minute to pitch their subject matter. This and the bound copy of the presentations were enough to narrow down the list of things I would be sitting in on for the first few days. On Monday, the mid-day blocks didn’t look very good, but the weather was. So I went biking along Baltimore’s Gwynns Falls trail.

Smug Alert: The Gwynns Falls trail is a start to what I hope will be an extensive trails system in the Baltimore area. Kudos to the folks who helped put it together. However, because I live in the northwest, I am spoiled on the quality and quantity of trails I have access to… even despite the icky weather. Apologies if this seems negative!

The Gwynns Falls trail spans 14-miles, connecting Baltimore’s Inner Harbor (where I’m staying) to the Fishing pier on Hanover street (due southeast, as the crow flies/floats) and almost the I-70 Park & Ride (west). I rode the whole enchilada, and then some.

Since this was essentially out and back route, The Plan was to head towards the western portion first, then pick up the southeast segment before returning to the hotel. I started from the Baltimore Hyatt with a depiction of the route produced by taping paper on my laptop and tracing the jpg map (yes, it’s low tech). Signage from Inner Harbor to the Ravens’ stadium was excellent, and for a couple of miles, I thought I’d not need the map. However, as I neared the Ravens’ stadium, the route went from downtown residential to highly industrial. As in big effing, angled railroad tracks, cobblestone bricks and lots of broken glass. The over-springiness of my bike averted anatomical peril.

The route got a little confusing at Carroll park where intermittent bike lanes were interrupted by construction. The park had “Do Not Enter” and “One Way” signs on a quiet, lower-trafficked segment that seemed ideal for biking. I gave up on the busy throughfare and toured the park.

The section west of Leon Day Park was both quiet and scenic, but the route got funky as it turned into soft-packed gravel obscured by heaps of foliage. Two spots were unridable.

West of Gwynns Falls park was especially confusing. North Forest road was closed for bridge repair, leaving cars to detour along Wetheredville Road. Once again, I lost the actual “trail” and ended up riding up all three spines. I don’t think anyone is intended to bike on those roads as there’s no shoulder and twig-infused humus dotting the rightmost side…. definitely not something I want to ride through. Eventually, I stumbled into the West Hills Park and Ride, with its surreal .placement at the termination I-70. I really should have taken a photo.

The Gwynns Falls trail wasn’t obviously connected to the Park and Ride, so I wandered northeast through the residential areas until I found the park again. On the way back, there was another spur, “Japur” (or something like that), that I turned onto for exploration. 50 feet later, there were huge chunks of pavement missing. Seeing no change up ahead, I turned back on the original course.

Back near the stadium, I took the southeast segment down Warner towards Middle Branch Park. This was the worst portion of the route, traveling along a nasty combination of railroad tracks, poor pavement, construction, and landfill. I would have turned around, but felt compelled to see if the end was going to be worth it, and whether it could possibly get worse.
Middle Branch park was pretty, offering scenic views from the south side of downtown, but not worth the trip by the landfill via fractured, railroad-pocked roads.

One odd thing was the “non-motorized vehicle only” section had three cars on it: one was park maintenance, one was a police car (scared the shit out of me coming around the turn at me) and one was some random guy, parked, dazed, and confused.

The best part of the route were the very friendly pedestrians along the way. In the northwest, people rarely take the time to unplug from their iPods. Nearly everyone here smiled or said hello back. One guy noticed I was squinting at my map and took it upon himself to direct me back on course to Carroll park. 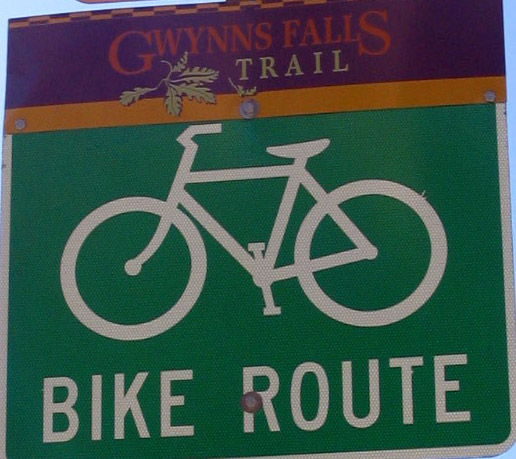