I don’t drive as much as I used to, but yowza, $54.87 to fill up my gas tank today.  For some historical perspective, the Energy Information Administration at the Department of Energy who publishes weekly gasoline prices.  Here, they attempt to explain gas pricing, best summarized as:

World crude oil prices reached record levels in 2007 due mainly to high worldwide oil demand relative to supply. Other factors contributing to higher crude oil prices include political events and conflicts in some major oil producing regions, as well as other factors such as the declining value of the U.S. dollar (the currency at which crude oil is traded globally).

[The decline of the dollar relative to the Euro is also manifesting itself in the Great Wii Fit Shortage.   Nintendo is sending four times the number of Wiis to Europe because it’s more profitable for them to do so.  I’d already given up on finding one at non-extortion prices.]

Here’s a historical plot of the last 15 years’ worth of gasoline prices in different parts of the country: 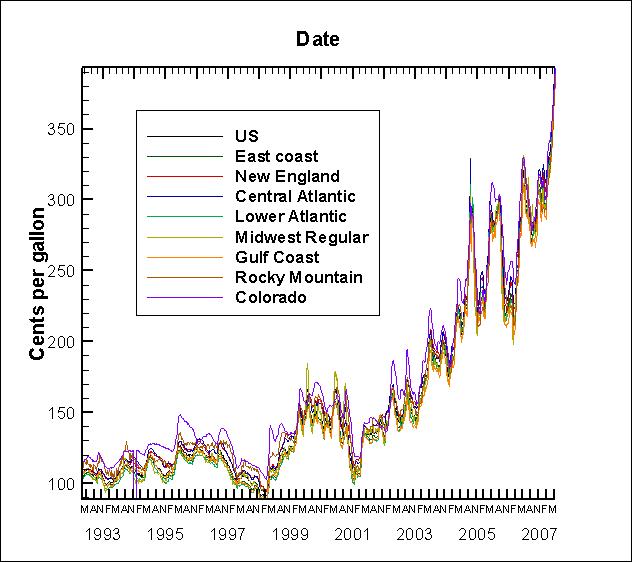 I have a smaller dataset for Seattle.  I hadn’t fully appreciated how much seasonal variation there is until I saw the plot versus time.  The rightmost side of the graph gets very fuzzy due to the rapid rise in the price of a barrel of oil.  As of Sunday, we were at $4.279/gallon.   Just eyeballing it, it would appear we’ll easily be over $5/gallon by September.  It might be interesting to rerun the numbers on the bike commuting. 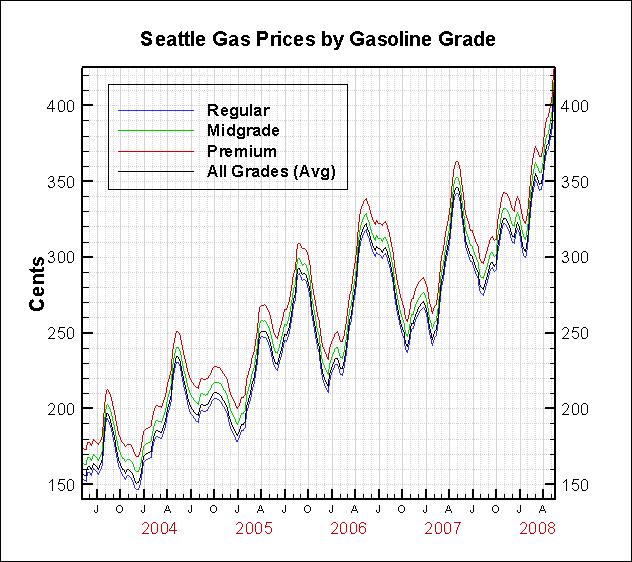