In the chart below, the red line represents the time-history of my participation in Postcrossing for the past two years.  The red line shows postcards sent, the blue line is the number received.  Any guesses where I lost interest because the five-card limit on cards in-circulation was a problem?  Bueller?

They’ve since increased the limit of outbound cards based on one’s prior participation.   Thus, now that I’ve sent 71 (372, 211 miles’ worth), I can have up to eight in circulation, which is seems about right.  The cards I’ve received have traveled a combined 303,242 miles, or one and a half times the height of all the pennies currently in circulation.

After 60 days, a card is marked “expired,” meaning the “slot” is freed up to send another.  It stays on the books for up to 365 days.  (I know this from experience.)  Two cards were lost in the mail (Italy, Brazil) and were re-sent.   A card to Germany awaits its recipient’s return to her mailbox. 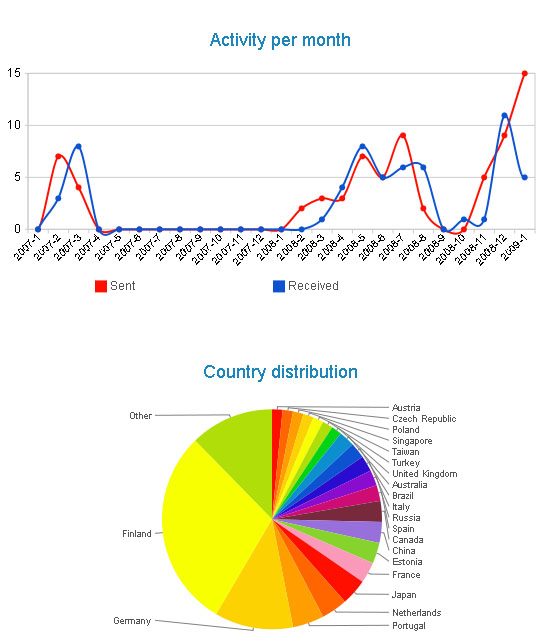 Initially, my outbound cards were plucked from tourist areas in and around Seattle.  However, now that I’ve gotten more into it, I’ve had cards professionally printed.  It’s not much more expensive, but makes it easier for me to write to a complete stranger because I can describe the specific location or circumstances where I took the photo.

Most recipients will specify personal interests in their profile.  Where I can, I’ll try to indulge them with a thematically appropriate card.  For example, one person had a penchant for lighthouses.  (No problem – I have one from Cape Disappointment.)  If I can’t, I use a Monte Carlo method.

Receiving cards is obviously fun.  If the sender describes where they live, it’s like a mini-vacation without having Hello Kitty Bag lost in the luggage transportation system.