Late last fall, when I was first contemplating replacements for my four year-old Dell Inspiron laptop, Netbooks piqued my interest.  I gave them serious consideration as a replacement machine, but there were three major problems:

1. Screen sizes suck, especially the vertical. The most common (at the time) were 1024×576, which was a huge step down from my Inspiron’s massive 1920×1200 display, but it’s all in the name of portability, right?  Actually seeing how bad 576 vertical pixels is requires you to run any Office 2007 application.  For example, Outlook 2007, with its “ribbon” and address fields, takes up nearly half of the 576 pixels: 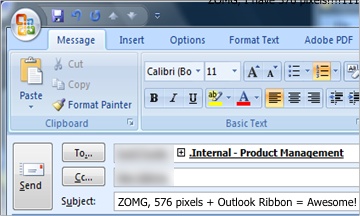 2. They run Windows XP – When I start my computer, I want to use my computer.  I don’t want to wait five minutes while the operating system boots, self-flagellates and every application phones home to download updates.  (I’m talking about *you* Java and Adobe Flash.)   In the back of my mind, I kept thinking about what I wrote in my rant from last year and the excessive amounts of required maintenance… just to use practice safe hex.

In theory, you would avoid rebooting by using “hibernate mode.”  (This is where the machine writes out its memory image to disk so the computer can be completely powered down.  When you restart, the image is loaded, and you’re right where you were before.)  This never worked on the Inspiron.  Come to think of it, it doesn’t work on my work machines, either.

“Sleep mode,” where the computer enters a catatonic state, functions marginally better… except the NetGear and Intel wireless drivers would sometimes and always, respectively, crap themselves on restart.  The drawback of sleep mode is it still consumes battery.  Every once in a while, the orbital mind control lasers command the machine to wake up in the carry-on bag.

3. Netbooks come with 1Gb –  One gig was fine for Windows 2000 (the most stable of the Windows brethren) in 2000.  It’s insufficient for XP and unbearable on Vista.

Conclusion:  A netbook wouldn’t do.