I was in “The Greater Houston Area” during the holiday to visit my parents. Although I have previously lived in Texas (twelve years in Houston, four in Austin), I lack a discernable accent and, when I’m away from it long enough, a full appreciation for the Texas mystique.

The name Texas is a derivative of “Tejas” (a mangled form of Thecas) used by the Hasinais tribe when referring to allies. The state motto is derived from this to be friendship , but there was strong objection to putting “The Friendship State” on the license plates. Governor Richards is often quoted as saying it was “wimpy.” Thus, “The Lone Star State” still reigns on license plates.

In school, we were required to take two years of Texas history, compared to one year of American history and a half year of world history. So yes, I’ve been to the Alamo, Washington on the Brazos and the Treaty Oak. I also learned all sorts of obscure “state things” like the state tree (pecan), fish (guadalupe bass), large mammal (longhorn), small animal (flying cockroach) and yodel (you don’t want to know). I still remember the local pronounciation of Humble, Bexar County, and Kuykendahl Road, though I’m still confused whether the “J” in San Jacinto is pronounced like the J in “Jim” or the J in “jalapeño.” (To be fair, the English language in general is bizarre. The “K” in knight is silent; “x” in xylophone is pronounced as a z; and don’t get me started on the “ough” in through, though, cough, rough and bough.)

Texas prides itself on all things big, including religion. As we drove up and down Highway 59 (the future Interstate 69), I was surprised at the quantity and size of the churches. I was filled in on bits and pieces of the local
church-equivalent of “office politics.” For example, a nearby church
was co-administered by a couple of pastors who had a “frank exchange of views.” One later rented part of a struggling strip mall. The juxtaposition of a “Luby’s Cafeteria” and this house of worship is as surreal as the concept of two Southern Baptist ministers having a serious enough disagreement that warrants starting another congregation.

A mile south is a church undergoing its fourth expansion in as many years. Across the highway is one whose parking lot is packed on Sunday because the doors are locked at exactly 8:30 a.m. — a curious interpretation of the eleventh commandment, “Thou shalt be prompt.”

I had some fun reading the local newspaper while I was there. Three stories that grabbed my attention:

The immense physical size of Houston isn’t fully appreciated until one has to drive through it. For example, our drive to the Houston Zoo was just under 50 miles. One night we drove 45 miles to go to El Tiempo, a Mexican restaurant. The food was worth it: warm roasted tomato salsa, handmade tortillas, tomatillo salsa, whole beans and prime rib fajitas. 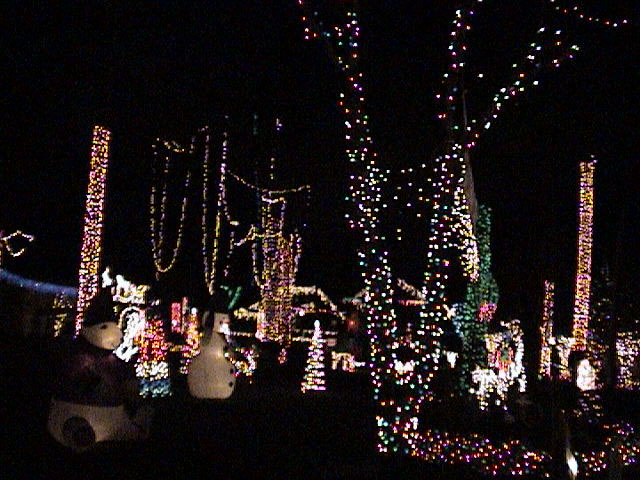 Another example of the “bigness” was the impressive display of Christmas decorations in the place next door. This is probably the real reason that transformer blew out on Christmas eve.

People have good manners. I heard a lot of “Pardon me’s” and “Thank You’s” in unexpected places. It’s not every day that a woman refers to me as “Hon,” “Darlin'” and “Sweetie” in the span of five minutes and in front of my spouse.

One thing I do miss is the grocery stores. We stopped at H.E.B. Central Market, their flagship store with a vast armada of produce, fresh-baked artisan breads, and a deli stocked with no fewer than 20 kinds of olives. It was delicious. I snapped out of the reverie when I came home and walked into PCC only to find they were out of portabella mushrooms, again. Later this week, I get to monkey with the bullshit dual-pricing structure used by Albertson’s, Safeway, and QFC. (I got my Safeway Affinity Card right here.)