Last year a coworker was planning to buy a bag of high-quality raw coffee beans from the San Cristobal Coffee Company. Although he drinks impressive quantities of coffee, he didn’t want all 95+ pounds. He offered to let some of us get in on the deal. I ended up with ten pounds’ worth of raw peaberry beans.

Score! Acceptance into the Pacific Northwe’t Coffee Cabal would finally be attained!

Like a moth is drawn to a bright light, so was I initially interested in the Binford Roasterator 2000 that would digitally roast individual beans to the brewing nirvana. Its price and apparent requirement of a nuclear-based power source, zoning permit, and college-level training were non-starters. Plus, my Kitchen Aid mixer would get jealous.

Plan B was a modified air pop popcorn maker. This was appealing on so many levels, especially the “taking stuff apart” and “disabling safety mechanisms” prerequisite. It’s cheap, too… if you can find one. Neither Target nor Goodwill had one.

Plan C, which is what I will show today, uses inexpensive “best of breed” technologies: a wooden spoon, my ailing gas grill and a cheap, Ramen-encrusted pot that has somehow stuck with me in the 25 years since entering college. 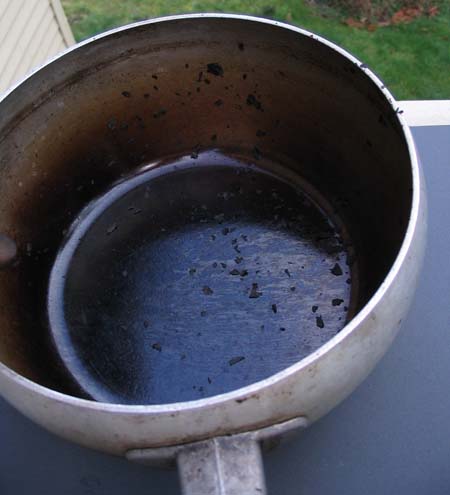 The choice of pan is significant. Coffee stains will not come out! Seriously. Do not plan to reuse the pan for anything except roasting coffee.

Absolutely imperative – do this outside and wear clothing that you’re going to immediately toss into the washer. Before you shower. Coffee roasting produces fumes that make you question whether you’re doing it correctly. 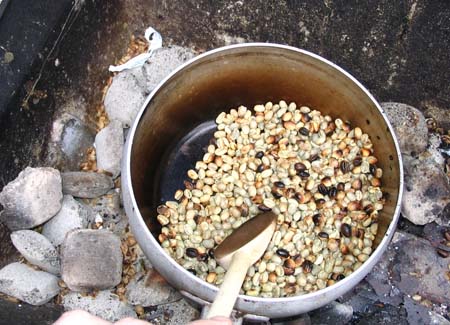 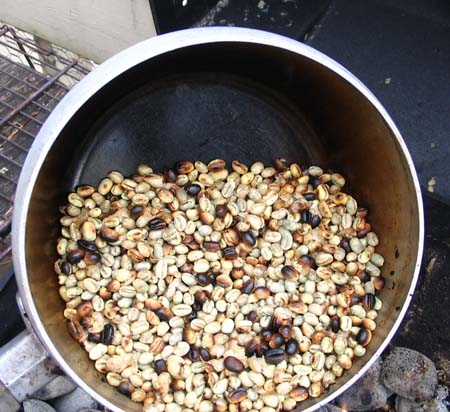 Take the grating out of the grill and cook just above the burner set to high. When I cook 3 to 4 cups, it will take ten minutes for the mixture to warm up. During this time, stir constantly. Soon, you’ll hear the beans crackling.
As you keep stirring, the crackling will slow down as the chaff has worked its way off the beans. 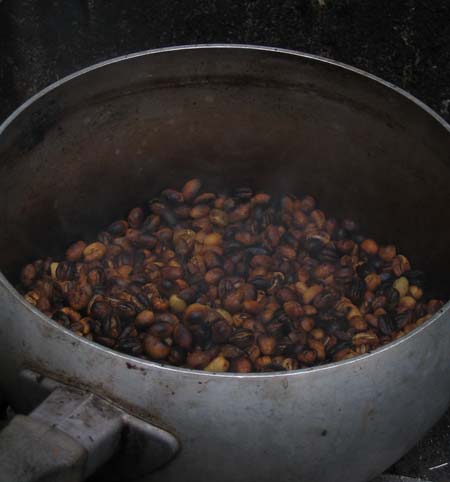 As you continue cooking, and stirr constantly, the journey to roasting takes an ugly turn. The beans will emit a nasty bluish smoke. As the smoke rate crests, crackling will restart. Cook the beans another few minutes, or until they have a moderate level of brownish-blackness. 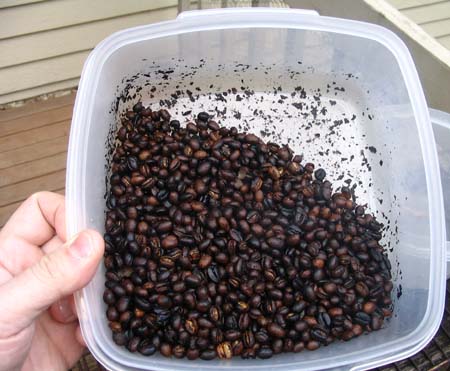 Pour them into a heat-proof container and let it air-cool outdoors for several hours. WHen they’re at room temperature, put in a loosely covered container for a day before sealing up. (The extra time lets the BSoD leave. There will likely be a bunch of chaff in the bottom. If it bothers you, pour the beans in and out of a colander and shake it out.

All Your Brews Are Belong To Us