RSVP is less than three weeks away and although I’ve done a lot of riding, I haven’t done a lot of long rides, where long means > 50 miles.

The last two weeks at work have been pretty frenetic. It appears we’re on track, which is good because I’ve got a long bike ride I am planning to do in a few weeks. Although I’ve been fairly consistent with mileage, I haven’t done any really long trips. I had planned to do a Tour de Blast: Reloaded with Gardner, but my schedule has been iffy and I had to wimp out. Finally, last night, it looked like I’d have a free weekend.

As a result, there was no planning. I could have done Pedal the Pinchot if I had thought it through. But I didn’t. I got up at 7 a.m., pored over some maps of previous rides and noticed Flying Wheels used a rest stop in Monroe’s Lester Street Park. This was reasonably close, and had the advantage of a simple out and back route: head to US 2, go east, turn around, back to the park. The Ride Around Washington is planning to use this segment later in the year, so it must be minimally acceptable for cycling.

The road’s pretty busy, with narrow shoulders that occasionally disappear when you cross many of the bridges over the Skyomish river. Fortunately, the drivers are generally comfortable with the idea of either passing with a wide berth or waiting until the cyclist clears the bridge and moves over on the shoulder.

From Lester Street Park, you head north about four blocks to the terminus of SR 203. Hang a right, and you’re on US 2. There’s a lot of the usual signs of civilization: strip malls, franchises and gas stations as you work through Sultan and Gold Bar. The road is pretty flat up until Gold Bar, where you get a moderate 500′ climb.

The road flattens out for the next 15 miles to Skykomish, the last town of significance until the pass. There’s a little espresso/souvenir stand named “First Chance” (heading west) and “Last Chance” (heading east). This oasis has a Honey Bucket and bottled bottled water. Had I realized the latter, I would have topped off by Camelbak and water bottle, both which were running very low. Temperatures were in the low 90s.

I continued towards the pass, planning to turn around when two of the following occured: I saw the pass, I ran out of water, or it hit 12:30pm. With the sun beating down on me, I ran out of water pretty quickly — you can tell I don’t ride in the heat much anymore. I had a half hour until 12:30pm, assuming there were no facilities at the top. I plodded along the 5% grade until 12:30 pm, my cutoff time, came. Temperature was now 96F, I had no water, and I was probably 4 miles away from the pass.

It was time to turn around and head downhill.

I stopped at the espresso stand, some 15 miles downhill, and had a peach smoothie, then picked up two 20oz bottles of water. The afternoon headwinds lessened the enjoyment of my downhill. I stopped again at the next espresso stand (owned by the same people, apparently), again out of water, and bought two more bottles. Once I hit Gold Bar, the route was pretty flat and quick.

Total trip distance was 92.5 miles, in just under 7 hours, or about 13.3 mph, a really good pace for me. Elevation gain was just over 3,500′. Trip temperature ranged from 80F (start) to 96F. I consumed three Clif Gels, two Clif Bars, a peach smoothie and two oatmeal cookies. I drank almost a gallon and a half of water — I certainly would have had more if I had planned better. I got sunburned on my left arm (near the jersey) and the tops of my thighs, but the SPF45 held up on my face and ears, the usual culprits. 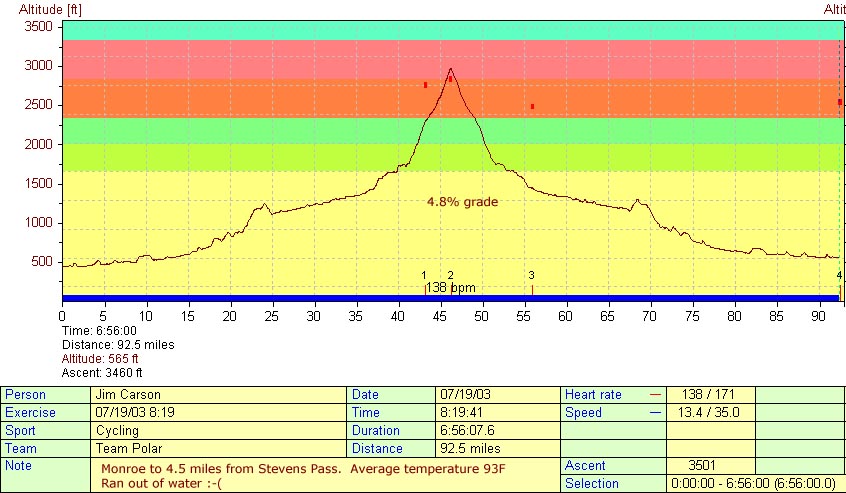 My bike was also overhauled at Pedal Dynamics. It’s a cool operation – Dean, the owner, comes to your office and does the work there. I thought it would be a nice alternative to dropping my bike off for a week.