One motivation for the exercise last week in reviewing 10-Q/Ks was to come up with some forecasts on the marketplace. We also use an array of industry analysts who are ostensibly better connected and do this stuff all day, but the numbers I’ve seen are all over the place. Consider the following chart:

(I know this is busy, but I had to take out the PII because I don’t like talking about specifics of my employment. If it helps, assume that I’m just a simple data farmer.)

The setup – We have commissioned four analyst firms — Alpha, Bravo,
Charlie and Delta Companies — to prognosticate the market size for our
“hard-boiled eggs.” (We have a separate forecast for Deluxe, Jewel-Encrusted
eggs, but that’s another day’s discussion.) The vertical axis is dozens sold, while the horizontal axis is year sold. The two vertical red lines denote the date range the forecasts were made. Analyst Alpha was the first out of the gate, very near the end of 2003. Analyst Delta was the last, publishing their report a few weeks ago. Today is December 19, 2004.

We know the Hard-Boiled Egg Market is declining. However, the
current economies of scale suggest we can continue to make a profit
selling hard-boiled eggs as long as the
overall market size remains above 20 dozen and we maintain substantial
market share (which is not my immediate problem). Once the overall market drops below 20 dozen, we plan to do something else with our chickens. Thus, what we and the chickens are very interested in when the market will decline to the point where we should exit.

What you should notice in this graph:

As I’ve trolled specific numbers in the 10-Q/Ks, I’ve gotten a sense for how the major players’ numbers fare and have some basis for comparing the historicals to each analyst. Conclusion: We could make a lot of money selling whatever Analyst Bravo is smoking. Analyst Delta seems to have the most credible numbers I can cross-reference in the 10K/Qs, but I don’t think the market decline will be so … linear. The real number is probably somewhere between Alpha and Delta. I’ll present all of them, without this colorful commentary. 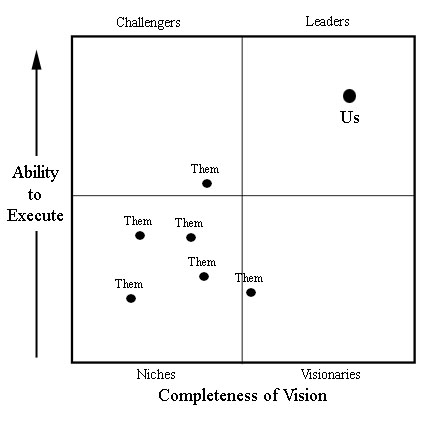 Another analyst thing that I’ve always found funny is the ubiquitous Magic Quadrant, first used widely by Gideon Gartner, founder of the Gartner Group (and later Meta). In this simple graphic, the vertical axis is labeled “Ability to Execute” and the horizontal is labeled “Completeness of Vision.” It should be obvious that you want to be in the top right corner. If you’re having a hard time understanding why, change the axis labels to “Fantastic in Bed” and “Someone Everybody Likes to be Nice to.” (for example)

The Magic part of this graphic is how you define the metrics. The analyst firms understand that their revenue is commensurate to the number of clients they have, and often do business with your competitors. You won’t be surprised that your competitors also want to be in the magic quadrant, but without you. To accomplish this fealty, the analyst choose different interpretations of “Ability to Execute” or “Completeness of Vision” as appropriate. For example, in the hard-boiled egg case above, a competitor might have eggs whose tops aren’t quite as narrow or, perhaps, with a brown shell. The analyst concocts some text as to why this is demonstrative of “Vision” and shifts the do to the right. To elevate the dot, they might decide that “Ability to Execute” correlates to delivering hard-boiled eggs in recyclable paper (versus polystyrene) containers.

For customers who don’t use the analysts’ services, it’s very hard to get into the Magic Quadrant because “Ability to Execute” might be tied to “Ability to Fund Analyst Studies on the Completeness of Vision.” If a company is very promising — or they’ve worked with the same executives when (the executives) were at previous employers — the analysts might grant them visionary or challenger position, labeling them as “promising.” As the studies get funded, or not, the dot gravitates to its proper quadrant.

(At least that’s my theory.)