MegaPatch Tuesday greets many with Windows XP’s auto-reboot nag-o-matic. You know it by this:

Clicking “Later” means “Ask again in five minutes.” Whoever designed this had the philosophy that fixing their mistake is far more important than you’re getting work done. It’s also obvious they’ve never actually needed to do a presentation for important people. When this stupid, stupid thing pops up it’s Neener neener, user-boy! And guess what, we’re gonna reset your browser preferences back to Internet Explorer.

Both Susan and I have posted (though I had forgotten I’d done this) about arcane commands to change this behavior. Having tried a variety of linuxes machines — Ubuntu, SUSE, Fedora/RedHat, Gentoo and Mandriva — I don’t recall any of them needing to reboot. Kernel updates are rare. Application fixes, not so much.

When I had to boot into Vista 64 to do some testing, I dreaded the hour-long download of six weeks’ worth of upgrades and the subsequent, mandatory reboot. I was pleased they’ve taken a less draconian approach to “Reboot Later”: 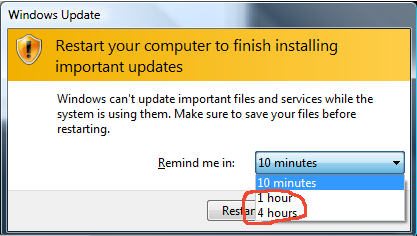 Without going into the specifics, let’s just say I want to install the most recent (November 2006) edition of a scientific computing package. I have this running on my 32-bit desktop. Unfortunately, the inherent 32-bit-ness limits the size of data I can manipulate.

It seemed logical that I would install a 64-bit operating system on my machine, and since I have a license, it would be “easiest” to use Vista 64. The operating system went well. The user experience didn’t.

To address innumerable security issues that have plagued Windows, Vista has “User Access Control.” This is its own form of self-referential sarcasm where “Access” means “If you’re persistent enough” and “Control” means “None, unless you’re willing to delve into the seven layers of the permissions inferno.” For example, when first running some_app.exe, I’m presented with three separate warnings. The first is a message to the effect of “This application wasn’t signed, only run it if you know and trust the provider. The World May End. Do you really want to do this?!?!”

The installer unpacks itself and runs its real setup program, triggering the second dialog. I forget the wording, but it’s vague and ominous like “Danger, Will Robinson, Danger! The application wants to add things to your system!“

The third dialog was bizarre, reminding me of the final HAL 9000 scene in 2001: A Space Odyssey. As in “What do you think you’re doing, Jim?”

The installer runs to completion with no obvious errors.. except for this nugget that I hereby dub the “Vista Heisenberg Uncertainty Dialog.” My application may or may not have installed correctly. I can either know where it’s located, or know that it is installed. Not both. 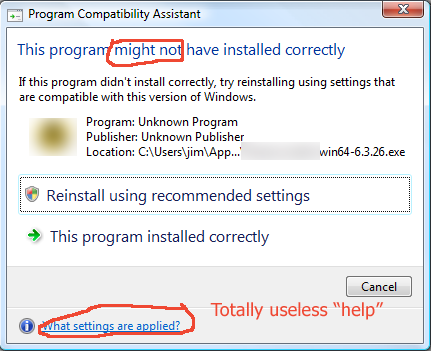 They really need a “What-fucking-ever” button. What does it all mean? Well, the short answer is Vista thinks the application needs to run in Windows XP compatibility mode. That’s certainly plausible. It’s also plausible that a message stating this would have been much more useful than the VHUD. Usability pop quiz: If I have a master’s degree in computer engineering, work with technology day-to-day, build my own machines for fun, and find this experience confounding, how should my non-geek mom be expected to use this? Hint: If I start speaking of “access control lists” or “secmod,” she’ll here clicking noises.

So after this, I needed to set up the FlexNet license manager for the application. FlexNet is the 32,768 pound gorilla of network license management. It’s been around forever and IT admins know how (but don’t like) to set it up. Windows Firewall knows nothing about it. Behold: 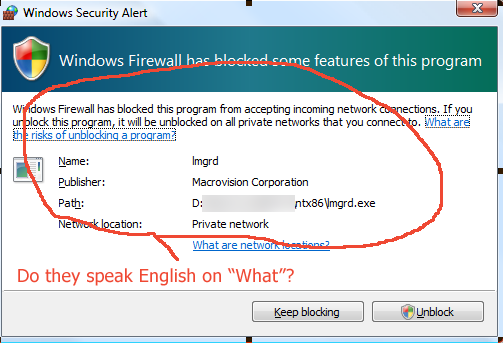 Sure, unblock it.
The coup’d’grace comes when I want to load in my license key file from the drive used by my Windows XP partition:

Clicking “Continue” does … (wait for it)… nothing. AAAAAAAARRRRRRGGGGHHHH!

This is why the Mac commercial is so funny.