If I write a review immediately after a cycling event, and the cycling event wasn’t 100% fantastic, my review tends to sound negative. For example, consider last year’s RSVP, where a central question I pondered during much of day one was “why the hell am I doing this?” This is a legitimate question to ask if you’ve been riding in rain for 80 miles, but may not be representative of the overall experience.

If, instead, I wait a day or two before writing about the ride, the endorphins have bathed my innards, helping me rationalize away any minor annoyances. Had I waited long enough to take a warm bath, get a massage, eat gelato, and sleep soundly a couple of nights, my feelings would be tempered. Now? I feel it’s a fine ride, but I still plan to take off from this year’s to do RAW.

So Sunday, after the ride and a four hour drive home, I posted a quick review of the ride and started writing this blog entry.
The quick summary of my experience was: gorgeous route with light support. A few days have passed, polypeptides have bound to their neuro-receptors, and you know what, it was okay. As is my prerogative as site owner/local BoFH, I’ve edited my original review. I still think they have a way to go on this ride, but I want them to succeed. I’m breaking this entry out into two, reflections of my experience and a “So you want to host a cycling event.” I hope Denise or Steve, who also rode, can offer their post-event high insights.

I took the long way to Chelan, intent on helping scope out portions of the Cascade 1200 later this month. Even though I printed the tick sheet for it and meticulously plotted my route and made sure I had fresh batteries in my voice recorder, I forgot all the paper documents. Men will understand why I didn’t want to turn around and drive 30 miles back home to fetch these things. Instead, I relied on my aging memory on what the route should be and … mostly got it right.
Until Sunday, I didn’t fully appreciate how much certain areas of eastern Washington state resembled areas of Texas where the terrain was bereft of texture (trees, hills, etc)

I rolled into Chelan about 7:00 pm, checked in, then drove to find the starting point. On the way back, I found an RV selling tacos and attempted to conjure my high school Spanish in ordering. The food was great, and I obviously ordered the right stuff, but I still felt very pitiful. (It’s much like hanging out with my cool relatives listening them talk about their cool toys and cool social lives. They don’t exactly tell me to geek off, but I definitely feel like a stranger.) So while I thought about rolling my rr’s, y-ing my ll’s and emphasizing my ch’s, I was chagrined at butchering a beautiful language.

The guy next door (Michael) was also riding, and brought his family with him. He mentioned he had contacted the organizers and they expressed the intent that people to do the three loops in a certain order, e.g. Navarro Coulee, Manson, and McNeil Canyon, essentially saving the hardest for last. Although, this is how I punched it into my GPS, I had hoped to do the McNeil Canyon part first to get it out of the way. To wind down, I did a bunch of crossword puzzles and half-watched the Thomas Crowne Affair. (Rene Russo es muy caliente; I’d love to see Pierce Brosnan play a role other than a rich, well-educated business tycoon/spy. Maybe a bum or a guest cast member on The 4400?) 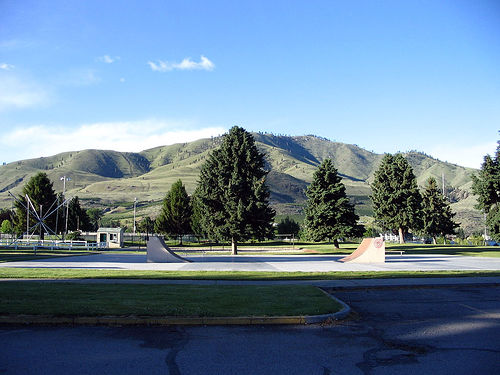 I woke up when the sunbeams bored through my lead-lined, motel issue curtain. After a Clif-breakfast of champions and deciding my hair couldn’t possibly be tamed, I tossed all of my junk in the car, checked out (waking the staff on my way out), and made the trip downhill to Don Morse park anticipating a gorgeous riding day. The gates were just being unlocked as I came. I grabbed a shaded spot, paid my five bucks for all-day parking and waited. Around 6:30, Denise and her husband rolled in. We chatted, I met Steve, and we waited. It’s common for a ride to officially start at, say, 7:00 a.m., but the registration packet pickups are available earlier so we slowpokes can get on the road.

The Chelan Century folks showed up at 7:00 on the dot and started hauling boxes to the mini shelter. I saw this was going to take awhile and, as is ritual, availed myself of the restrooms.
Other cyclists streamed in to pick up their packets.

According to the guy handling registration, 38 folks had preregistered. I understand they had another 20 or so do a day-of registration. Still, it was rather chaotic, appearing that this was their first time operating a cycling event. For example, maps for the first loop were unavailable, possibly buried in some of the box of packets. 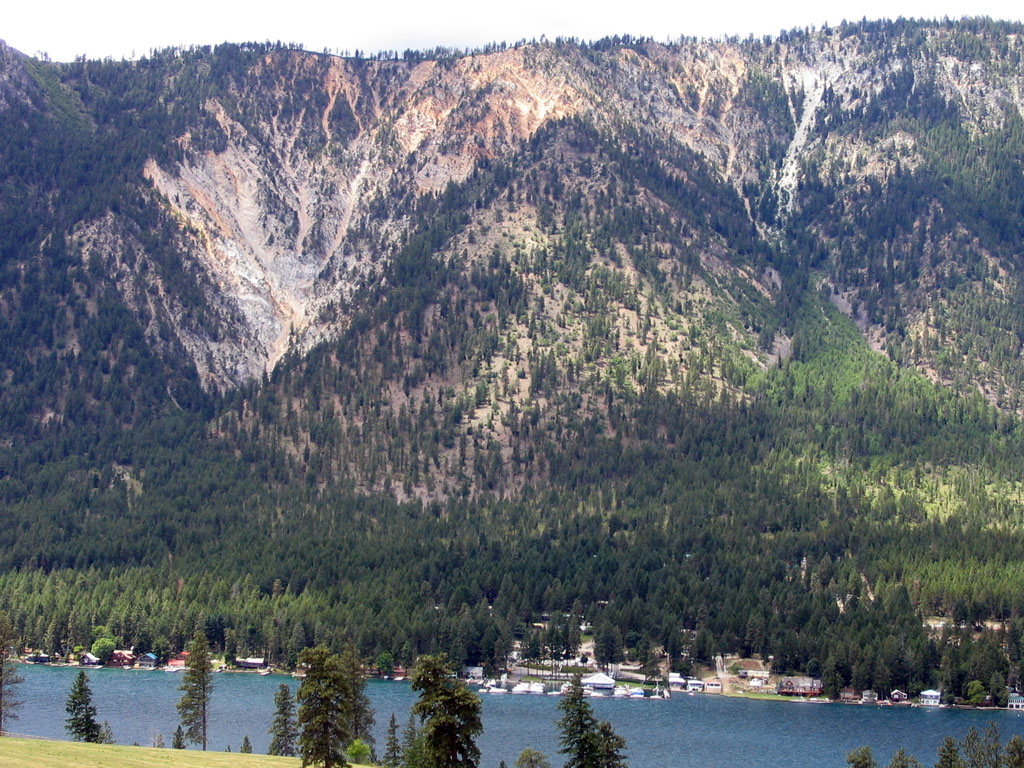 So, now the ride.

The Navarre Coulee loop was wonderful. They smartly routed us in a clockwise fashion, which put at the tunnel heading downhill. In theory, there’s a button to press before entering the tunnel. It triggers the flashing yellow lights, indicating a bike is present and drivers might want to avoid doing an old Battlestar Galactic “Colonial Viper launch” sequence through the tunnel. I was moving too fast downhill for it to matter. Blink. Through it.

The rest stop near the top of the second hill was stocked with orange slices, plain breadsticks, water and Gatorade. The organizers were very friendly, asking us questions on how they could improve the route. I finally clued in that this was their first. Denise and I made our suggestion at letting the slowpokes start earlier because we’re used to riding it unsupported (if we know it’s that way). They seemed genuinely receptive to the suggestions and apologized for the disorganization at the beginning.

I replenished my Camelbak at the registration desk in Don Morse Park. A few miles into the Manson loop begins a 1,000′ ascent on side roads. I noticed this section was marked with signs – I think the organizers were responding to some requests from people on the earlier route.

The view in the valley is fantastic. Later in the route are roads bounded by high rocks on both sides. These channel the wind, which by that time of the day, had picked up. It felt like a real struggle to climb these portions. When it opened up again, some of the gusts were on the spectacularly scary side. While trying to take this picture:

the wind caught the front “hood” portion of my bike helmet, jerking my head to the left. The descent was exciting given the unpredictability of gusts.

At the second foodstop, the organizers were asking each cyclist for suggestions on improving the ride. The route continued winding around the cherry and apple orchards before turning back to follow the water to Don Morse Park. I talked myself out of doing the McNeil Canyon Loop, picked up my ride T-shirt, and called it a day. Before I left town, I had a real breakfast at the Apple Cup Cafe.

Denise has graciously allowed me to post her views on the ride. I’ve edited these down:

[…]The official ride start time was 8 or 8:30 a.m., depending on which version you read or heard, but since I’m a turtle and worried about time, I had to get going if I wanted to do all 3 loops. So we started out at 7:25 a.m. […] Because we didn’t have a map, and we started early so there were no cyclists to follow, I thought we were going the wrong way when we kept on going up a hill on the main highway and I thought we were supposed to go along the shore of the lake. So I went down the hill and then saw other cyclists heading up the hill, so I climbed the hill again. […]

Finally all sorted out, we rode our 1st loop, and at the top of the
Navarre Coulee, there was a rest stop with no Port-a-Potties, but there
was water, Gatorade, and snacks […] The volunteers there debriefed us and 2 other cyclists who were there, and we told them some of our complaints and gave them some suggestions on how to improve the ride. I really needed a bathroom and didn’t feel like using the green room, so I left Steve finishing up talking with them and I took off down the hill and hammered the 10 miles back to Chelan. Good, done with the 1st segment (30 miles, 2,000 feet
vertical).

Started on our 2nd loop. Went north toward Manson and on hilly
backroads. How about headwinds on the uphills? This loop was more
difficult than the 1st loop, what with the headwinds and steeper hills
and headwinds while climbing (yuck). Took a little longer to complete.
[…] And those
headwinds going north toward Manson became fine tailwinds going south
back to Chelan, oh happiness! Finally back in Chelan, with the 2nd
segment done (30 miles, 2,000 feet vertical).

Started on our 3rd loop, the toughest loop of all. Everyone tried to
scare us about the difficulty of this loop. They said it was horrible,
no views, views not worth the climb, etc. Some said we should have done
this loop first, because you wouldn’t have the legs for it later, or
just skip it and get mileage if that’s what you wanted by just riding
the main highway. Well, I did want to do this loop first, but they said
there would be no support since they only have one set of cars and
volunteers doing the support and rest stops so they were doing it in the
order stated. Of course, we’re pretty self sufficient so we should have
just went ahead and done this loop first. But whatever, we knew we
wouldn’t have any trouble ending with a tough loop. Early or late, our
legs can take it. We’re more hardcore than most people and hills don’t
terrify us.

Anyway, this 3rd loop involves headwinds on the main highway by the
Columbia River, and then an 8-mile grind up McNeil Canyon, with an
average grade of 12% for 6 miles, and with some sections with pitches of
15% or better, 19% at some point. We were the last ones climbing; the
rest stop people had closed up shop for the day and were coming down and
gave Steve some water. Cyclists zooming down said “Good job!” or “Go
for it!”, and one said, “You have no idea!”. Well, they can’t scare us.
We climbed and climbed, slowly but surely. Reminded us a lot of Tour de
Blast which we’ll be doing next weekend, with its long sustained climbs
with some steep pitches. Finally reached the top, yippee! and turned
around, because it wasn’t a dead end road; the road kept on going down
east somewhere else but we weren’t supposed to go that way. As we were
zooming down, we saw another cyclist still climbing! We thought we were
the last ones on the road! Guess I won’t be the Lanterne Rouge* this
time 😉

After descending, which wasn’t the most fun descent because the road was
bumpy, it was only about 4 miles back to Chelan (with one last hill of
course! but a mere speed bump compared to McNeil Canyon). We finished
around 6:50 p.m. […] Steve and I high-fived on completing our
7th century!