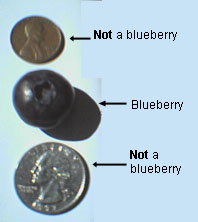 Bybee-Nims Farms, in North Bend, opened its “U-pick” blueberry fields this week. When we went on Wednesday, the parking lot was teeming with mini-vans and station wagons full of families with the same idea. The fields are very prolific, and one doesn’t have to venture far to find a good bush. Blueberry bushes have no thorns and, at least on the farm, grow in nice rows. (Blackberries, which will be in season next month, grow like weeds and have thorns on everything, including the leaves. I have never seen a “U-pick blackberry farm.” )

After picking ten or eleven berries, my oldest was content to play “picnick” with one of her friends. My spouse and the youngest took turns filling up the youngest’s little bucket. Meanwhile, I went for the motherlode. All told, we came away with a shade under 17 pounds of blueberries (at $1.20/pound). The berries are very huge, as you can see in the picture to the left.

The youngest was very proud that she filled up the bucket “all by herself,” and insisted on paying for, bagging, labeling and freezing “her” berries separately. 17 pounds is a lot of berries. We put most in the freezer. TwoOne pounds are is in the fridge, quickly being eaten.

I will post a recipe next week after I’ve recuperated from STP.