After writing a friend a long letter on different ways of getting on and off the plateau, I thought I’d further document it in hopes of easing someone else’s having to figure this out by trial and error. (Otherwise, this is food for google.)

As a reference point, I live south of the Sammamish Plateau and work in the Factoria area which, as the crow pecking on my cedar roof shingles flies, is southwest.

I take Issaquah-Pine Lake to the big stoplight. Although it’s improved since last time I took photos, the road still sucks because it’s busy and the shoulder disappears a couple of times along the way. A rear-view mirror is a necessary safety item to time the traffic.

There are four options down the hill from here.
Options 1, 2, and 4 assume you turn right onto Issaquah-Fall City. The bike lane disappears right at SE 58th street. (I don’t know if this is implying they want you to take this?)
It helps to look at a picture: 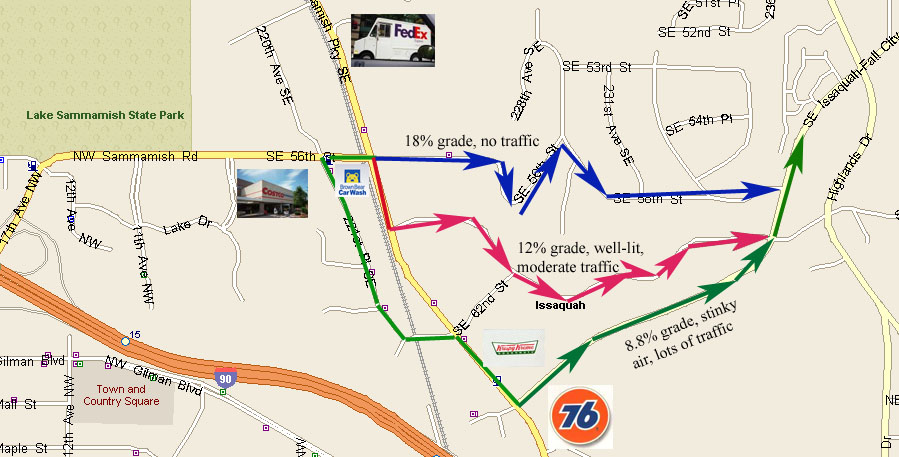 The bike lane on SE 56th disappears near the espresso stand. About 50′ past that is what looks like a driveway, and it’s where I hop up onto the sidewalk for the rest of the ride along this street.

Now, on the way home… it’s mostly reversed with some changes. The uphill on SE 56th is sometimes hard to get to because prevailing traffic — and there’s lots of it in the afternoon — wants to turn right/left. (Oh yeah, the hill’s hella steep.)

I’ve been taking Black Nugget uphill, but riding on the sidewalk. I used to take the red route, but a problem with that is in the afternoon, there’s a shitload of traffic making the left turn from SE 62nd onto Black Nugget. It’s kind of hard with that grade to make the transition back up hill while also catching the attention of the driver who thinks she/he can make it through. So, instead, I’ve been continuing along E. Lake Sammamish Parkway and taking the left-turn light onto SE 62nd Street, riding through the parking lot, up the hill, and right onto the sidewalk at Black Nugget. It’s a slight improvement.

Before I could consistently do Black Nugget, I’d take Issaquah-Fall city uphill. Hang a left just before the Walgreens, meander through the parking lot to where it says “Do Not Enter,” and go up the sidewalk. It’s 9%, but very stinky as the traffic screams down the hill. In the summer, it’s also got nasty blackberry plants.

Oh, one more comment about the green lines… I used to take the right turn before the Brown Bear car wash, hoping to bypass the busier E. Lake Sammamish Parkway. There’s no shoulder and the road is in bad condition. This wasn’t a problem until cars figured they could cut around the busy intersection and take this, too. So, now I prefer the busier, but much wider bike lane option.

When I was commuting to Redmond, I’d take some of the back roads up to SE 24th where it dumps out by Discovery Elementary, right on 228th, quick left onto 20th (past Pine Lake Park). When it ends, turn right onto 212th and follow Thompson Hill road to E. Lk. Sammamish, through Marymoor and up 51st. 51st was veins-pulsating-on-the-forehead steep, but not as busy as 40th. Issaquah-Pine Lake to 228th also works, but the shoulder periodically goes away. People here are nervous enough about traffic circles that they don’t know how to deal with cyclists in traffic circles.

Yet another way up/down the hill would be to take 228th Ave SE/SE 43rd. I’ve not done this because it puts me past where I want to be and near the busy intersection near Pine Lake Shopping Center.