My tire had a weird bump-bump-bump to it on the way into work this morning. Since the tire was not losing air, and there was nothing obviously lodged in it, I assumed it was tar or gum or something.

The mental note to look further once I got into work was apparently shredded. On the ride home, the bumpiness was readily apparent on the smoother portions of the road. At the entrance to the I-90 connector trail eastbound, I pulled over do a more thorough inspection. The tire’s sidewall was separating from the bead that keeps it on the rim. The “Mr. Tuffy” pad was barely containing the inner tube. Translation: “it’s gonna blow!” Since I was in “no man’s land,” the mid-point between work and home, and the rain was picking up, I continued towards home.

The inevitable boom happened on the final uphill just before my street. This was about as good as I could have hoped for.

The rip in the side of the tire was about three inches long, cause unknown. The part that finally blew left a hole big enough for me to poke my finger through. The tube had a hole approximately the width of a cheap hotel pen. I don’t feel as bad about throwing it away because it already had five patches in it. 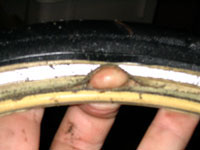 Since I already had the back wheel off, I swapped out the drive train and replaced the rear disc brake pad.