On Saturday, I went out with a local “Hike of the Month” (geocaching) group on the redux of their “Snowshoe 101.”  (Yes, despite living within 30 miles of a snowy mountain, I have never gone snowshoeing before.  Or skiing.)    The goal was Gold Creek Arches, with an optional trek out to Snowshoe 101.  A personal subgoal was to not screw up my Achilles tendon.

Three of the “lackeys,” as they call themselves, joined us as Groundspeak wanted to interview  Greg McCaddon (aka “TotemLake”) for their Lost and Found video series.  Our start was delayed for Mandatory A/V Equipment Fiddling.

Since the other folks — Greg (TotemLake) and Jeff (Land Rover) — had grabbed the cache last year, the other Jeff (Krauss-McClurg) and I (jim_carson — because I have run out of memory for new userids) were given the honor of going for the cache.

Yep, in there. The snow under the bridge was about 3 1/2 feet deep and extremely fluffy.  As soon as I stepped onto something, hilarity ensued. They will probably edit it out, though.  One thing I learned quickly: Jeans can hold a lot of moisture.  Later in the week, I bought my first pair of hiking pants.

The Groundspeak folks needed more footage, so Greg demonstrated how to get up (with snowshoes on).  While they were talking, I hiked around for a wider view.  Frozen lake is smiling.

Annie, Miriam and the filmographer went back to Seattle.  TotemLake, Land Rover, Krauss-McClurg and I continued on to Snowshoe 101.

The cache was a bottle hanging on a string inside a stump.

As I ate my cold bagel, our two guides whipped out their cooking kits.  Jeff had some chili, Greg had Starbucks’ Via while his noodle dish was warming up.  They said they carry enough to survive in the wild for three days. 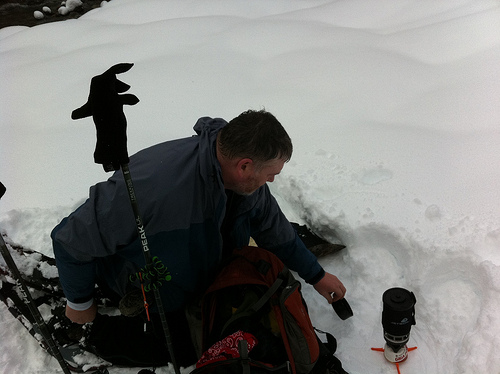 This was our lunch spot:

The hike back went relatively quickly, except… there were two ice bridges over active streams. After three burly guys went over them, the fourth, me, was enough to break it. Lucky for me, I had been paying attention to Greg’s demonstration on how to get up while wearing snowshoes.