I think I’ve finally settled on events for the rest of the year.
I’ve already done the Chilly Hilly, McClinchy Mile and the SIR 100K populaire.

April: I was planning to do the Daffodil Classic again, but there’s a Camp Fire activity that weekend. So, I’m heading over to Spokane the following weekend for the Lilac Century Surprise.

May will be a busy cycling month. On the first, I’m signed up for the Camano Climb. Memorial Day is the 7 Hills of Kirkland, now in “Director’s Cut.” The birthday party clashing with the Skagit Spring Classic (recommended by Tim Fellows), was rescheduled. Spouse permitting, I’d like to do that ride. And if that weren’t enough, the Bike to Work Commuter Challenge happens.

In June I will be doing the Chelan Century Ride and Flying Wheels. It was tough choosing between the Chelan and the Wenatchee rides. Flying Wheels is local, and will give me an indication on how I’m progressing towards the big enchilada in August. We’ve also got a family camping trip scheduled.

July is very busy with family obligations and potential trade show travel. I’m hoping to do one of the randonneuring 200km brevets, either with SIR or the British Columbia club.

In August, I’ll likely do the Tour de Peaks because it’s so close and a relatively easy 60 miles. The big event, of course, is Ride Around Washington, which will run from Bellingham to Ilwaco, via the peninsula. The itinerary still isn’t firm, but the last two days are rumored to be 109 and 97 miles, respectively.

I slack off again in September with the Tour de Whidbey.

October is too far away, but I’m definitely doing the Mountain Populaire. This time, it’s personal. 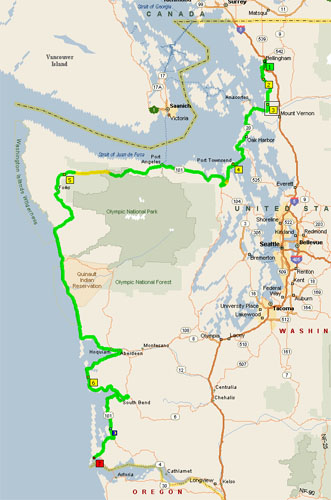