Last night I assembled my bike in anticipation of seeing the greater Cincinnati area up close and personal. The bike made it through TSA’s clutches fine, but I discovered my frame pump was missing. TSA never fully closes the latches, so my theory is it fell out while they were rummaging. Grrr….

The nearest bike shop, Reser Bicycle, didn’t open until noon. Since I didn’t want to waste the entire morning watching the Stephen Segal marathon on TNT, I planned a circle route around the perimeter, intent on minimizing the time in that area. As I set off with a squishy front tire, so began my comedy of errors.

Shortly after Goebels Park (point 4 on the map), my rear wheel slid slightly on a turn — the tell-tale symptom of an about-to-be-flat. I pushed the bike along a couple of miles of Covington, KY, neighborhoods. At the bike shop, I bought a frame pump, a spare tube, and had them change the flat while I got something to eat.

The plan was to pick up KY8 and follow it west along the Ohio River through Boone County then, legs permitting, try out some Northern Kentucky hills. Shortly after crossing back over the Licking River, I had another flat. Since the tube was new, and I wasn’t in a hurry, I was going to patch it and motor on. Unfortunately, I discovered that not only was the tube they put in too large (438 versus 406), I was also down to one patch (out of the ten-pack) left. (During a rainy-day flat a couple of weeks ago, I went through several trying to get a good seal. While packing, I grabbed this depleted kit instead of the new one.) Argh! The patch gave out as the tire neared full inflation. Argh2! I triple-checked the tire for pointy things and put in the new tube, gingerly folding the excess into the tire. Inflate partially. Reseat. Deflate. Reseat. Fully inflate. 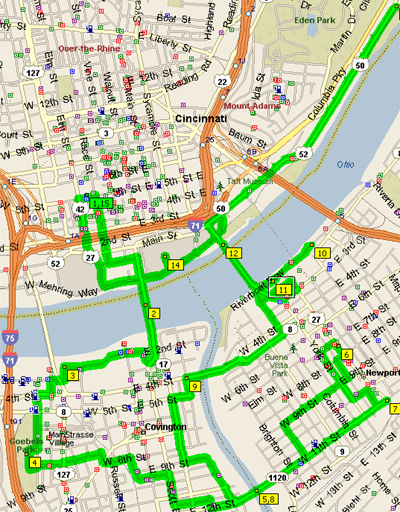 Though I could have gone back to the bike store to buy a patch kit, I was leery about doing any substantial distance with the incorrectly-sized tube. I headed back across the river, then followed a pedestrian path past the Reds’ stadium to the Theodore M. Berry International Park and back. This was my slowest 15-mile ride in a long time.

After showering, I walked over to the convention center to set up the booth. The structure for the display wall reminds me of Buckminster Fuller’s octetruss. When compressed, the structure is 36″h by 12″w by 12″d. Expanded, it’s 72″h x 120″w x 18″d, with four vertical sections forming a curve so it won’t topple over. Three clips and five vertical bars on which the four graphics panels can be magnetically attached. Its shipping case converts into a podium. It does not morph into a crime-fighting robot, however.

Though the display is an interesting piece of engineering, it’s also seen its better days. For example, the vertical sections are missing most of their pegs. We used to have a shelf that would let us put a monitor in one of the vertical panels, but I don’t think anyone seriously believes it’s structurally solid enough to hold one. Instead, we put a black vertical panel.

Later in the evening, the “Gold” corporate sponsor hosted a reception in the convention center with “heavy hors’d’oeuvres” — which always seems to mean massively processed foods (crab-stuffed mushrooms, quiche cups, fatty pork and chicken wings), cheese, and warm fruit — and an open bar. Though the room was packed, there was no line at the soda stand. 🙂

The keynote starts at 8:00 a.m. (Eastern Standard Time), exhibit runs until 5, and another reception in the evening.